Armor Wing is still incomplete. Please remove the checklist upon completing all the tasks.

The Armor Wing is an exclusive dragon released with the Battle for the Edge expansion on December 18th, 2015. It can be purchased for 750 gems (600 for members) or awarded for finishing Heart of Darkness.

"Sitting atop its hoarded pile of looted metal on Iron Isle, the Armorwing appears at once impregnable and invincible, but appearances can be deceiving.

With its welding torch-like flames and chain-whip tail, the Armorwing keeps enemies at bay long enough for it to attract new scraps of metal to its magnetic body and fuse them into an ever-expanding coat of armor.

However, that armor is just a shell used for protection and intimidation. Beneath that reinforced hide lies a much different dragon that would prefer to remain in isolation with its private trove of discarded metal treasures"

For more information on the Armor Wing, visit here.

Quest: Stuck on You Edit

The Armorwing that lives on Armorwing Island for unknown reason is losing pieces of its metal armor, leaving its soft skin defenseless. The player needs to find the suitable metal to help it build up its armor again.

In the quest the player will learn about magnetism in the lab, and it is explained that the Armor Wing is a living magnet, capable of attracting metals that are affected by magnetism, and then uses its fire to melt them forming an armor around its body. Similar to the Boneknapper, the dragon is defenseless without its armor.

The Armorwing was trying to use Silver as material for its armor, but given that silver is not affected by magnetism, those fragments won't adhere to the dragon's body.

A wild Armorwing is with Fishlegs at Berk. Because Armorwings generate a small magnetic field around them, they can make a compass points toward it instead of north. 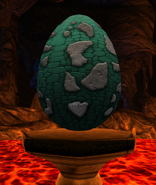 Baby Armorwing flying in the Hatchery

Armorwing Swimming (back view and animated) 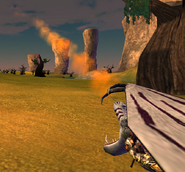 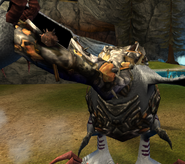 Armorwing Braking
Add a photo to this gallery

Retrieved from "https://dreamworks-school-of-dragons.fandom.com/wiki/Armor_Wing?oldid=40571"
Community content is available under CC-BY-SA unless otherwise noted.