From the School of Dragons Game Guide: (pre-update)

"Astrid is considered to be one of the smartest and toughest teen Vikings in the Isle of Berk. This feisty and fearless young Viking is not someone to be messed with as she displays great skills and training. She works incredibly hard, has a tough attitude and is often looking for ways to prove herself as one of the best Vikings in all of Berk.

"Astrid tends to be extremely observant of others, prideful, and very goal-driven in whatever she pursues. Her dedication and desire to be the best allows her to outshine her fellow teen Vikings in training. At first, Astrid despises Hiccup, looking down on his inabilities as a fighter and often views him as just another obstacle in her training.

"Her perception of the dragons was like any other Viking, hateful and ready for battle. It was not until her competitiveness took over that she followed Hiccup deep into the woods one day and discovered the secret of his sudden talent: Toothless. She saw something that she could never have thought was possible - Hiccup had befriended their village’s enemy, a dragon. But what she came to discover was a connection that was deeper than a pet relationship; it was a bond that evolved into friendship.

"It took some adjusting, but Astrid finally turned a corner and realized how similar these dragons were to the Vikings and that these creatures were capable of friendship, kindness, and compassion.

"As time progresses, Astrid begins to see a different side to Hiccup and later becomes one of his closest friends and confidants. Eventually, she is instrumental in helping him gather the other young Vikings for training as they ride into battle against the Red Death."

Astrid can be found:

Prior to 7/25/13, Astrid was located on one of the game's mountains but was moved for the sake of convenience.

In the Game[edit | edit source]

Old Icon
Add a photo to this gallery 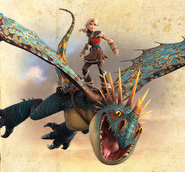 Astrid in the loading screen
Add a photo to this gallery
Retrieved from "https://dreamworks-school-of-dragons.fandom.com/wiki/Astrid_Hofferson?oldid=42933"
Community content is available under CC-BY-SA unless otherwise noted.