Bull's-Eye Lagoon was a minigame located to the right of the entrance of the Training Grounds where you could test your skill and accuracy. In this game, the player could aim to shoot as many targets as possible within a certain amount of time while flying on their dragon.

On November 24th, 2015, Bull's-Eye Lagoon was no longer avaliable though, it was believed there was hope for its return.

On May 30th, 2018, v2.12, they removed the "Closed for Repair" signs and the general entrance is gone: Bull's-Eye Lagoon has been officially shut down.

There were two modes in Bull's-Eye Lagoon: single player and head to head. In single player, you and your dragon would be flying solo. Once the door opens to the target area, there would only be single color targets that you were allowed to shoot. Playing was similar to Fireball Frenzy; to shoot, aim with the mouse and left click, though this game required you to navigate and control your flight pattern as well.

If it was a multiplayer option, there were two sets of targets – blue or red. You had the option to fly, shoot, and stop. It was a tight race against time as the dragon had two minutes in each course to hit the maximum number of targets to win points and trophies.

Dragons could also take advantage of the three power-ups that could (and still can) be purchased for gems; the Energy Boost would increase a dragon’s energy, the Smart Bomb would explode at other riders, and the Speed Boost would give the dragon a temporary speed boost. Energy for your dragon could be purchased as well.

The Infamous Glitch and ShutdownEdit

The glitch involved the player entering a non-fully loaded/fully loaded Bull's-Eye Lagoon and having no ways of exiting the minigame. From there, everytime the player tried to enter the game normally, it would automatically place the player inside said glitched minigame, not even reinstalling the game would fix it. The only cruel solution at that time would be restart the game from scratch.

Players who didn't got stuck tried to help out the victims while victims would try to contact and report the admins about the game breaking glitch. It has been reported people getting stuck inside it for days, months and even years, all waiting for the solution to finally leave the minigame.

On November 24th, 2015, the minigame was closed down for repairs and the glitch was finally fixed. For more than 2 years, it was believed that it was going to be rebooted and/or be reopened since the glitch is already fixed.

Unfortunately, that was not the case as for May 30th, 2018, v2.12, the entire entrance was removed and Bull's-Eye Lagoon was officially shut down for good.

It's unknown if the minigame will return, only future can tell what will happen to Bull's-Eye Lagoon. 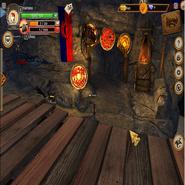 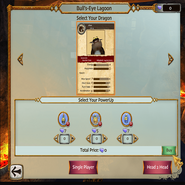 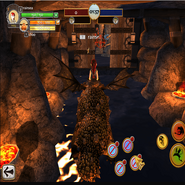 Starting the game
Add a photo to this gallery
Retrieved from "https://dreamworks-school-of-dragons.fandom.com/wiki/Bull%27s-Eye_Lagoon?oldid=19333"
Community content is available under CC-BY-SA unless otherwise noted.