Catastrophic Quaken is still incomplete. Please remove the checklist upon completing all the tasks.

Notes: Entire Gallery needs a redo, and it needs the Catastrophic Quaken from the Battle for the Edge.

The Catastrophic Quaken (Quaken for short) is a Boulder Class dragon released on September 24th, 2015. They can be purchased for 750 gems (600 for members) from the store.

"This dragon has a somewhat stubby and short body. It has rather small wings. The Catastrophic Quaken also has dark brown, wrinkly skin, akin to that of the Gronckle and the Hotburple. It is covered with spikes all over.The Catastrophic Quaken's head, body, and tail are covered in short spikes. Its lower jaw can split in two, with a tongue on each jaw. They are larger than other dragons, including the Gronckle."

For more information on the Catastrophic Quaken, visit here.

The aggressive nature and strength of the Quaken is the probable reason that made the Dragon Hunters run away from The Dark Deep in the same quest. We can also see its typical behavior of rolling into a ball and slam into walls, as it help the player test the defensive walls at Dragon's Edge. 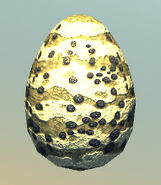 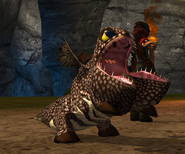 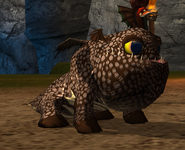 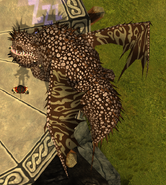 Size comparison between a Quaken and a Viking

Quaken Breaking
Add a photo to this gallery

Retrieved from "https://dreamworks-school-of-dragons.fandom.com/wiki/Catastrophic_Quaken?oldid=42061"
Community content is available under CC-BY-SA unless otherwise noted.