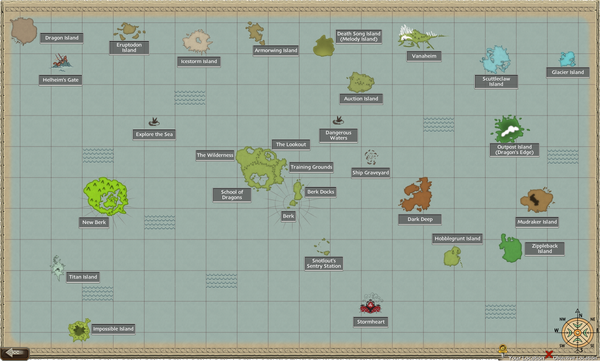 Locations play a big role in the game, as it's where all the Characters, Minigames and Store (where you buy the Dragons and other important things) are located at.

The School and Berk have plenty of updates as well as, along with The Farm, they also change during holidays (Dreadfall (Halloween) and Snoggletog (Christmas)), making themselves more unique than the rest as they are the only locations to ever change appearance during holidays.

The player starts off the game with 15 locations, all free to be explored. Overtime, the players unlocks them, each with their respective requirements.

Down below is both a summarized list of all the locations and their respective pages and categories.

Starter Locations are locations that are already unlocked the moment you start the game. They often are home to multiple characters and/or quests/steps. Some locations have a special or are home of a mechanism, for example: Titan Island is the only place where you can titan your dragon and The Lookout is home of The Farm.

Quest Locations are locations that require a certain quest to be unlocked. The only location who, after being unlocked, becomes home of multiple quests, steps and even an entrance to an expansion is The Wilderness. Gothi's House and Dragon Hunter camp are the only locations that exclusively only appears during quests.

Exclusive Locations are locations that require the usage of gems (with the exception of Icestorm Island, who requires gold) or usage of Membership to buy the expansions to unlock the locations. From time to time, some locations that were once expansion-only are now starter locations due to some expansions using them - a big example is The Ship Graveyard, which is used in Secret of the Leviathan expansion.

Other Locations are locations who either:

The Store and Job Board are considered to be this due to appearing in multiple places (both appear on The School and on Berk, the Store taking form of a tent and the Farm Jobs taking a form of a Job Board) and the Store can be accessed by clicking on the shopping cart.
Trending pages