Credits Island (Credits Isle or just Credit Island) is a very old Easter Egg that School of Dragons has since an unknown date.

Credits Island is a medium mountainous island, with a large, thin volcano in the middle, surrounded by fog and large gears. When the player enters, the player will be on a small, high grounded sea stack, with a wooden board and with 2 Viking stones "holding it", which is where the Credits are displayed. Both the larger isle and the smaller isle are connected with a wooden bridge.

If the player goes across the bridge, there's going to be an entrance, blocked by wooden planks, with the words "Coming Soon!" written on it.

The only way to access it is by going to the Options menu. In the Options menu, there's a button named "Credits" with a exclamation mark, clicking said button will make the player teleport to Credits Island

Close-up of the Island 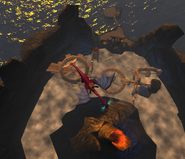 Close-up of the Entrance
Add a photo to this gallery

Retrieved from "https://dreamworks-school-of-dragons.fandom.com/wiki/Credits_Island?oldid=33528"
Community content is available under CC-BY-SA unless otherwise noted.