Curse of the Hobgobbler is the ninth expansion pack released in School of Dragons[1]. It was released on July 31st, 2019, as part of version 3.2.0, though the Expansion was partially released with the price of 1,000 Gems

until it was fully released with a price of 1,250

This summer the twins have been pulling all sorts of pranks but not all have gone quite as planned, and now they need as much help as possible to restore peace at the school grounds. As usual Ruffnut and Tuffnut are up to no good and in hopes of pestering the dearest Gobber, they have managed to get their hands on a couple of Hobgobblers that ultimately get out of control. Now with Hobgobblers running lose across the entire Isle of New Berk, Vikings will have to rise to the challenge and control all the scattered Hobgobblers. That’s not all! Gobber is convinced that these dragons have brought upon a bad omen and must now be returned to where they came from, leading Vikings to discover a marvelous cave entrance down into the Hidden World! [1]

The Hobgobbler Dragon Armor is customizable with either custom colors or matching with your active Dragon's color.

The first quest of the expansion, A Gobble Problem is free for all players, Dragon Tactics level included. 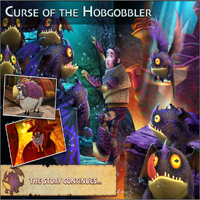 Retrieved from "https://dreamworks-school-of-dragons.fandom.com/wiki/Curse_of_the_Hobgobbler?oldid=32862"
Community content is available under CC-BY-SA unless otherwise noted.