Deadly Nadder is still incomplete. Please remove the checklist upon completing all the tasks.

The Deadly Nadder is a Tracker Class Dragon released with the SoD's release and is one of the seven breeds available to choose at the beginning of the game. It can also be purchased from the store for 250 gems (200 gems for members).

"According to the Journal of Dragons, the Deadly Nadder is classified in the Tracker Class. This dragon’s beauty and brutality can be seen in its natural armor of piercing poisonous spines. A Deadly Nadder’s key strength is its ability to 'spine shoot.' Spine shooting allows the Nadder to shoot hundreds of poisonous needles from his tail at once.
"The Deadly Nadder’s bright blue and yellow coloring give a majestic beauty, all coated in deadly venomous spines to give its lethalness. The Deadly Nadders are very high in firepower, their scales strength (creating a tough armor) and venom."

For more information on the Deadly Nadder, click here.

In Fire It Up!, an experiment with the spectrometer reveals that the Deadly Nadder fire is made out of magnesium, that burns at a very high temperature. Also, water doesn't extinguish magnesium fires.

In Following Harald's Trail, a fossil that seems to belong to a Deadly Nadder is shown. 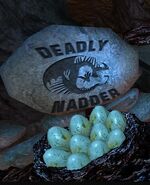 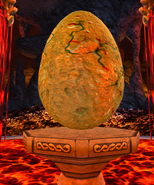 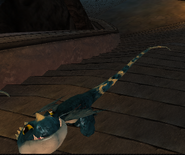 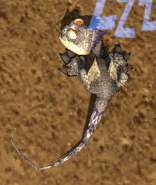 Deadly Nadder Braking
Add a photo to this gallery 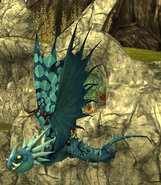 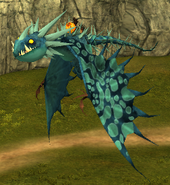 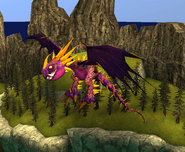 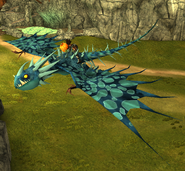 Comparison between Titan and non-Titan 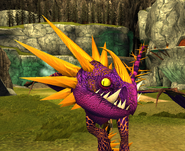 Head spikes partially moves with the dragon animation. For example, they are closer to the neck when the dragon rise its head

Detail of back markings and spikes

Detail of wing scales and back and tail spikes

Dorsal and head pattern
Add a photo to this gallery

Close-up of the "loose socks" patterns 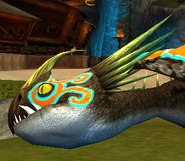 Comparison between a Nadder with and without War Paint

War paint on a titan

Head patterns
Add a photo to this gallery

Vivid Dreadfall skin (under view)
Add a photo to this gallery

Retrieved from "https://dreamworks-school-of-dragons.fandom.com/wiki/Deadly_Nadder?oldid=41599"
Community content is available under CC-BY-SA unless otherwise noted.