Devilish Dervish is still incomplete. Please remove the checklist upon completing all the tasks.

The Devilish Dervish is a Sharp Class dragon released on. They can be purchased for 5,500 coins (4,400 coins for members) from the store.

From the How to Train your Dragon wikia:

"Have you started noticing trees slashed down and forests in array? Be wary because this signals the arrival of the one and only… Devilish Dervish! Hiccup and Toothless spotted one of these deadly creatures when they stumbled upon a path of torn down trees. The Dragon had laid an abundance of eggs, of which they were lucky enough to bring to campus."

"It was quite the risk on their part, but Hiccup knew his Viking friends were ready to take their dragon training skills to new heights. And that is why he and a trusty troupe of explorers where able to bring some back for you to hatch! You will find that this dragon has a tail that resembles a scythe; the sharp blade allows it to tear down anything in its path, so watch out! Due to its wild nature, these Devilish Dervish dragons are considered by many in the dragon world as being extremely hard to train and control. Hiccup was even overheard saying that he thought that only the most elite level ultimate of dragon trainers would be able to take on this unruly dragon."

For more information on the Devilish Dervish, visit here. 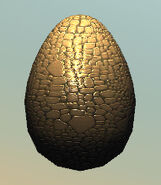 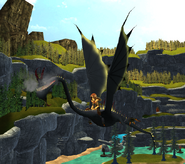 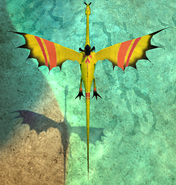 Upperwings, body and tail
Add a photo to this gallery
Retrieved from "https://dreamworks-school-of-dragons.fandom.com/wiki/Devilish_Dervish?oldid=42063"
Community content is available under CC-BY-SA unless otherwise noted.