The Dragon Hunter ship is a quest-only location found in the expansion Return to Dragon Island. You can't access it again after finishing the quest Saving Skulder.

Similar to Auction Island, you can't access it with your dragon.

In the quest is called Dragon Trader's ship.

The Dragon Trader's ship is a wide wooden ship, larger and less armed than the usual Dragon Hunters ships we see in game (see the Dragon Hunters page for examples), but it shows the Dragon Hunter's symbol on the sail. It doesn't have weapons and dragon cages on the deck, but its size suggest it has plenty of storage space in the inside. 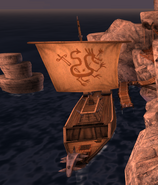 The ship's stern from aboard

After clicking the ship prow's, you are teleported to the ship entrance. This is also the point you will be teleported to, if you get caught by the dragon hunter during the quest. You see the access door in front of you, and if you turn back, you see some stairs that goes up to the hatch from where you entered. You can't go out from here though, you need to cross the hunter's ship and go out through a door there.

Entrance for the ship and point of respawn

After crossing the access room, you find the first room. It is guarded by a fixed hunter, so you can't cross it directly. The room has two corridors at the side, you can take any of them to reach the second room. There's a Dragon Hunter walking in circle in every corridor, so you need to take care to not cross them.

Here and in all the rooms, there are small cell-like rooms, some of which are open. The fossils are kept in such small rooms.

Curiously, standing on the crates at the center of the room will make you respawn only when the right corridor Dragon hunter pass near you, not the left one.

Right corridor
Add a photo to this gallery

The second room has 2 entrances, that corresponds with the ends of the lateral corridors of room 1. It has only one exit though, that is across the room on the right. Some crates create a separation in the middle of the room. The left part is guarded by a standing hunter, so you can't cross there. The right part has a walking hunter, that comes back and forth from the third room, so plan your movements.

On the right part of the room there's a dark zone, with crates, where you can hide while waiting the right moment to cross to the third room.

The first fossil is in this room, in a cell right next to the right entrance.

Second room, higher point of view. There's a dark corner on the right

Turning 180 degrees from the previos pic. Behind that wall there's the first room, with the 2 access on sides

The third room is connected to the fourth room in 2 points: a door, you see in front when entering this room, and by a corridor on your left. Dragon Hunters walk in circle from the door the the alley, so it's easier for you to advance following the hunters to the left.

When you turn to the left, there will be some crates that create a barrier. The hunters walk on the left of this barrier. Go ahead, and you will find an elbow bend, that carries you to the corridor. In the bend, there are 2 cells, one of which hides the second fossil. At the end of the corridor you will find another cell with the third fossil, and nearly in front of it, the door to the fourth room.

Third room, as soon as you cross the door from second room. You need to go to the left

Same room, but seen by entering the other door (from fourth room).

Left part of the third room. On the right is the fourth room, on the left the second room. In front of you, after an elbow bend, the corridor to second and third fossil.

Corridor, you are coming from the right. The second fossil is in one of the dark rooms on the right.

Corridor, final part. The third fossil is on the blue-lighted room at the end. On the right, access to fourth room
Add a photo to this gallery

On the left wall from when you enter, you will find the exit door. Click on it to go out of the ship. If you click on it before you retrieve the 4 fossils, you will be able to come back in from the hatch, but you'll have to cross all the ship again.

The cell that stores the last fossil is in the dead-end corridor on the left, close to the exit door. Both are guarded by the walking Dragon Hunter, so time your move accordingly.

Door to go out

The last fossil is in one of the 2 rooms in this dead-end corridor.
Add a photo to this gallery

It can only be accessed by clicking on the Ship's hatch at Auction Island in the quest Saving Skulder.

Characters present in this location Edit

Retrieved from "https://dreamworks-school-of-dragons.fandom.com/wiki/Dragon_Hunter_ship?oldid=31194"
Community content is available under CC-BY-SA unless otherwise noted.