The Dragon Hunters are the main antagonist in the expansion Battle for the Edge. They are also named and rarely appear in free quests.

Dragon Hunters enemies are fought in the Icestorm Island levels of Dragon Tactics.

They have some variability in their clothing, that is generally composed of a short-sleeved shirt/vest (green, red or gray) with grey/red skirt, brown trousers with metal knee-pads, brown boots, leather bracers, leather belt with a metallic buckle. Some wear a red/brown vest over the shirt and skirt, and some have metallic shoulder pads. They wear a metallic helmet with a row of spike, some of them have lateral leather protections, and some wear also a mask.

The same model is also shared with Auction Island Storekeepers and Dragon Traders (Return to Dragon Island) and Stormheart's Pirates. 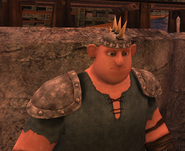 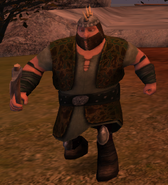 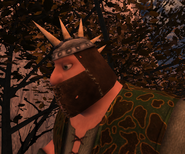 Other color scheme for clothing

other color scheme for clothing 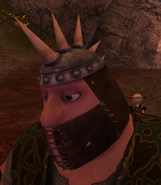 Detail of the helmet

Stormheart's pirate
Add a photo to this gallery

Dragon Hunters, as their name tells, capture wild dragons for some not specified business. They are their main source of income, but it's unclear how.

To hunt dragons, they use arrows that have been dipped in Dragon Root juice [src]. From the Dragons series we know that Dragon Root is a powerful sedative for dragons, so that they can handled in security and trapped. They use large metallic and strong cages to keep captive dragons, and such cages are transported in their ships and occasionally left on the island that are currently their hunt territories.

They don't seem to have preferences or etics when hunting dragons, they attack babies and adult alike [src].

They not only hunt the dragons themselves, but will also buy dragons from other dealers [src].

They are based on the Dragon Hunters from the series Dragons: Race to the Edge. For more information on their role in the franchise click here.

An abandoned Dragon Hunter hunting camp is found on The Dark Deep during Epic Catastrophe, and Dragon Root arrows are found in place.

Dragon Hunters cages with captive dragons are then found again on Hobblegrunt Island during Dragon Hunter Troubles, they were probably being sotred there temporarily while preparing the transportation to their final destination.

The player will infiltrate the Dragon Hunter camp during Heart of Darkness, to free the dragons they keep captive there.

In this expansion, Dragon Hunters are shown to hold a mysterious glowing blue sphere (seen here and here), that will be relevant in the following expansions.

In The Mystery of the Fog, a Dragon Hunter ship is seen going towards Berk at the Open Sea. After defeating it, the Dragon Hunters will tell that they got lost in the mysterious fog.

Dragon Hunters ships are attacking Eret at The Ship Graveyard, to get their hands on the last piece of Stormshatter sword. The player needs to fire at one of the ships in a similar way as Battle Events.

Dragon Hunters use ships as main way of transport. The ships are heavily armed, with crossbows on both sides, and they usually carry one or more dragon cages.

The sail will show the Dragon Hunters' logo, a dragon with crossed arrow and sword. 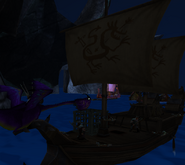 The Dragon Hunters made deals with Harald at least once, when he sold them the Quaken and the Armor Wing for a high price. Harald mentiones that he dealt with the dragon hunters several times in the past [src], and that they wanted to steal his wares [src], but being Harald, he's not trustworthy.

As Dragon Riders believe that wild dragons have the right to leave peacefully in their own environment, Dragon Hunters are natural enemies to them. Great effort will be made to interfere with the Dragon Hunters doing, and free any captive dragon. The Dragon Hunters of course will attack back to neutralize such menace to their business.

In the game, the Dragon Hunters capture the following dragon species:

Retrieved from "https://dreamworks-school-of-dragons.fandom.com/wiki/Dragon_Hunters?oldid=36516"
Community content is available under CC-BY-SA unless otherwise noted.