Dragon Island is one of the four locations of Return to Dragon Island, which can be accessed via membership or buying it for 1,250

Dragon Island is locked until the mission Dragon Island is done. Dragon Island is a gigantic, volcanic and mountainous Island. It's filled with numerous molted rocks/magma, large sea stack surrounding the main land, four cave entrances to the inside of the volcano, and the enormous fossil of Red Death.

Being a volcanic island, there's no fishing spots.

Tail
Add a photo to this gallery

However, by using a glitch, the player can enter inside the Green Death's nest - the Green Death's nest is a wide, open space filled with beehive-esque rocks, stalagmites, stalactites, tunnels surrounding the place with small openings and, down below, is a large pool of lava with a large stack in the center.

It's there that the player finds the Luminous Krayfin egg in the Mission Start! quest.

The cage where the "orb" was

The inside of the nest

Holes that lead to the inside of GD's NestEdit

Main entrance along with a massive amount of ships wrecked 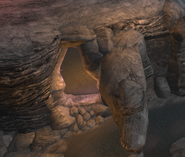 Close-up of the main entrance

Third hole (the one that would lead to the nest) 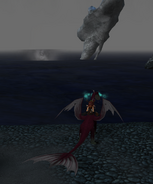 View of the volcano from far away

View of the inside of the volcano from above
Retrieved from "https://dreamworks-school-of-dragons.fandom.com/wiki/Dragon_Island?oldid=26960"
Community content is available under CC-BY-SA unless otherwise noted.