Dramillion is still incomplete. Please remove the checklist upon completing all the tasks.

The Dramillion is a Mystery class dragon that made its appearance to the school on 19th of June, 2018. It can be bought for 750 gems (600 gems for members).

The Dramillion received a Titan Stage in 18th of December, 2018.

"Although normally withdrawn and wary of humans, Dramillions mimic the fire blast of any dragon they encounter.

With their striking coloration, peaked crown, and curved beaks, Dramillions have often been called the parrots of the dragon world for these uncanny creatures can also repeat any kind of dragon fire they see. The Dramillion duplicates blasts that look - and burn - like the real thing. It's no wonder, then, that Dragon Hunters once forced Dramillions to reproduce their many fire forms for training drills. Dramillions have the highest shot count of any other dragon species by far. But even these copycats will hit empty after enough blasts. Fortunately, Dramillions can also transfer flames to each other. If one runs out of heat, the rest of its pack share their reserves with the spent Dramillion so it can fire up again!"

A wild Dramillion is freed from a warlord's cage in Throwing the First Punch. 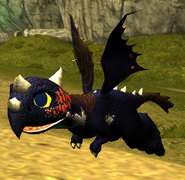 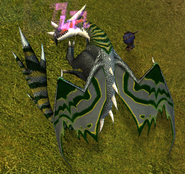 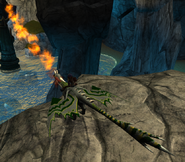 Close-up of his fire

Dramillion Braking
Add a photo to this gallery

Retrieved from "https://dreamworks-school-of-dragons.fandom.com/wiki/Dramillion?oldid=42070"
Community content is available under CC-BY-SA unless otherwise noted.