Fishing is an important part of game play, being one of the five main type of XP that a player can gain. Eating fish replenishes a dragon's energy and happiness (depending on the fish).

The current max level for Fishing is 30, fishing XP are gained only by catching fish.

To initiate the fishing minigame, locate a fishing spot and walk up to the water's edge, and click on the Fishing Rod icon that appears at the bottom of your screen - it's a circle with a picture of a fishing pole and a fish. 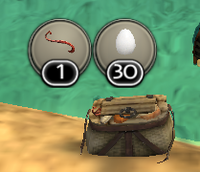 When you click the icon, a small bait bag will appear on the ground to the left of your character. Click the bait bag and the bait you currently have in stock in your backpack will be displayed. If there's something blocking the backpack's view, it's suggested to move somewhere else around the fishing spot.

Choose your bait (you can't undo this action, even if you exit the minigame) and when you are ready to cast your line, press the spacebar or click the big "cast" button in the center of the reel. Now that your line is in the water, a red "wait!" will be displayed at the top of your screen.

Watch your float for any movement and when it goes under the water, the red "wait!" changes to "STRIKE". Press the spacebar or click the reel button to STRIKE. Be careful not to wait too long to strike, otherwise you will loose your bait and have to start over again.

A new bar comes up at the top of the screen displaying the fish type you have on your line below it. The goal of fishing is to keep the pointer in the green-to-red gradient area of the meter until the fish is reeled to shore. Reeling can be done by holding the space bar or holding the Reel button onscreen and doing so moves the pointer to the right, closer to the red area. 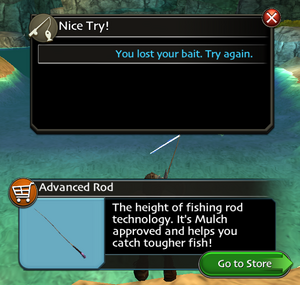 Result screen for failing at fishing the fish 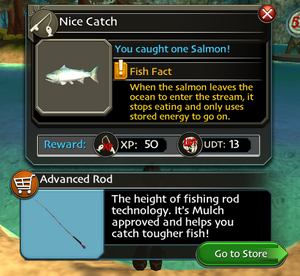 Return screen for succeding at fishing the fish

If your rod is an Improved or Advanced rod, a "Drag" button will appear, clicking on it will let the fish drag, moving the pointer to the left, allowing more control over the pointer. The official School of Dragons fishing guide can be found here.

A feature introduced with version 2.12.0, released at the end of May of 2018, you can now watch a short video ad to catch a fish that broke the line.

A Fishing Spot is a lake/shore filled with the respective water type fish, distinguished by the multiple, respective fishes swimming and jumping out of the water and some shores have three pieces of cut fish hanging from a small, wooden structure; by walking close to the shore of said lake/ocean, you can start fishing.

Some spots, however, have different ways to get it, for example the one in the Training Grounds has to be approached by the docks and both the Open Sea and the Aurora Lights fishing spots can only be approached with a Gronckle.

There are four different rods to date:

As you upgrade your fishing rod, fishing becomes easier. If you purchase an Improved Rod or Advanced Rod, they come with a Drag button which relieves tension from the right side of the meter.

With the exception of the Deep Sea rod, that switches with your current rob whenever you use glowworms, you can't switch back to the former rod, as soon it's brought, it will immediately become your current rod.

The Deep Sea Rod, earned via completion The Wide, Open Sea, also has a Drag button. To use this feature, use the space bar to reel and use the mouse to click the drag button. Be sure to not use the drag button for too long or else your line can snap.