"Fishlegs can best be described as a big and clumsy character. Although he is very large, his bravery does not exactly match his sizing. Fishlegs is someone who seeks knowledge rather than actual fighting time. He has a vast amount of knowledge when it comes to dragons and is able to spout out dragon statistics at a moment’s notice throughout training sessions.

"Later, Fishlegs comes to bond with Meatlug the Gronckle and is taught how to fly on dragons by Hiccup. As a result, his understanding of dragons helps build the new bond between Vikings and dragons. Fishlegs' impressive dragon knowledge allows the Vikings and dragons to defeat the Red Death by identifying its weaknesses and strengths just from observing and analyzing the intimidating dragon."

Fishlegs is the dragon rider with most knowledge about dragons, he observes them, adn note down their behaviour and characteristics, using "dragon stats" he invented. Despite this, he recognize Hiccup's leadership and abiltiy to solve difficult situations. [src]

In the game, Fishlegs can be found: 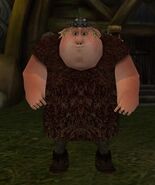 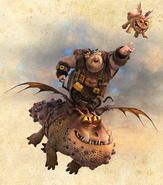 Group illustration in the loading screen
Add a photo to this gallery
Retrieved from "https://dreamworks-school-of-dragons.fandom.com/wiki/Fishlegs_Ingerman?oldid=32357"
Community content is available under CC-BY-SA unless otherwise noted.