Gems are the premium, scarce currency of School of Dragons, unlike Coins, they are a lot scarcer and often requires to waste the same currency to gather them.

Gems appeared ever since the game started, it serve as a premium currency, the opposite of the non-premium currency, Coins and Shards, and it's used to either speed up progresses, buy other currencies, age up your dragon, and allows the player to buy about more than 80% of the Store. They are represented as purple gems (

), which just like Coins, the amount of Gems in the icon changes. Unlike Coins, only registered players start off with 75

In the early days, the Gems were ridiculously rare, daily rewards would only reward 5 until two updates (one that changed to 15

, and the current one), invite friends would reward Coins and even members would only start to be rewarded 500

While today Gems are still scarce, it's not as rare as before.

What are the existing ways to gather Gems?

Gems can be purchased in six different amounts. In the past, School of Dragons has been known to run holiday sales that included discounts on gem purchases.

For the last several months the game has had many problems with the delivery of gems, a problem that appears to stem from JumpStart itself as Neopets—also owned by JumpStart—is known to have had purchase delivery problems during the same time frame. At the end of February 2016, the problem culminated in the game’s payment page being taken offline, although players were still able to make purchase through Google Play and the use of store-bought game cards.

Due to the problems associated with purchasing gems, players may wish to wait until they can use PayPal to make purchases again so that they can use its built-in ability to handle disputes for undelivered goods.

Additionally, support for purchasing from foreign countries is inconsistent across platforms. If the online, mobile, or downloaded versions won’t accept payments from your country, try purchasing through the Steam version of the game, which supports payment from a wider range of locations.

Players who purchase membership are meant to receive 500

per month per account (not per Viking). However, many players have complained in recent months over receiving their monthly gems late or not at all.

every 5 days. After the fifth consecutive day, the rewards counter resets to day one. For more information on log-in rewards, check out its page here.

You can also receive 2 additional gems a day (it was 5 before the 3.3 update) by watching a promotional video, by clicking on the banner on the bottom left of the daily log-in window if you are on a mobile device. Adding these to the daily log-in means that a player can receive up to 60

Added in the v2.15, the Ad Chest is a mobile-exclusive addition to the game and it's located by the currency counter.

Upon tapping, a pop-up will appear with the possible reward - to this day, it seems it's always 10

. By selecting "Yes", you will be given an Ad to watch. After watching it, the player will be rewarded and the Ad Chest will be on hold for 1 hour. Players can use this for an unknown amount of times, the highest amount of usages as been seven though it might be bigger. 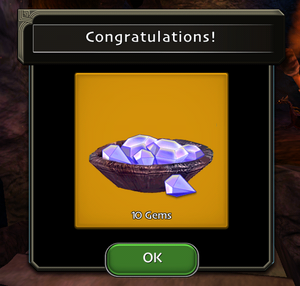 Often times, the icon won't load resulting in players either being forced to leave the Stables or reopen the game to make it load.

A recent glitch that appeared since v3.0.0 - the Hidden World Update from February 21st, 2019 or since the March 1st, 2019, the Ad Reward won't appear at all even after 1 hour and when it does, it won't work. Possible workround:

Stable Missions are the latest way that players can earn gems, and has caused at least one player to refer to this as the “golden age” of gems. Stable missions can be completed at any time, unlike battle events which occur on a fixed schedule. Between May 12th, 2020, v3.8.0, to August 20th, 2020, v3.11.0, all Gem Stable Missions were pulled out due to the Gems being "out of balance"[1] - currently, three Missions give Gems: Long Night Flight, Bright Light Flight (slot 5), and The Alpha (slot 3).

See the wiki’s stable missions page for more info of it's Starting Odds and suggested dragons.

More active players can try their hand at Battle Events for the chance to win gems. The higher the tier a player scores in, the larger the gem reward can be. For players in a clan, members of the three clans that score the most battle points in a given month will win 200 gems at the end of that month. For more in-depth information of how to battle and what rewards you can expect, take a look at the battle events page.

The minigames from the The Secret of Leviathan expansion pack, Cogs and Incredible Machine, can give gems. If a player completes all the levels with 3 stars, they can get a total of 300

. Both Cogs and Incredible Machine give 150 Gems.

Another minigame that can give players gems is Dragon Tactics. It rewards around 5-12

. Once you finish a level, there are four chests you can open. You need to answer a "quiz" to open the chests. If you get the answer right you get to pick your prize. If your answer is wrong, the chest becomes locked. In v3.10.0 - 7th Anniversary, July 14th, 2020, it has been reported that completing the first 4 Arena levels without completing Stormheart Champion rewards 200 gems. 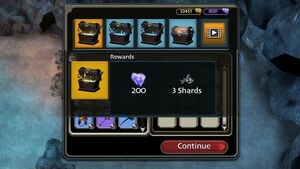 Aside from the Cogs and Incredible Machine Achievement, additional ones related to Flight Club have been added in an unknown update with 3 rewarding a total of 50, 100 and 200 for completing 45 Flight Club levels, 10 Hero Dragon levels, and getting 45 A+s respectively.

Completing Offers is a series of requirements ranging from playing a game to buy a product, it's mostly found on the Facebook version and its rewards can change from 1 Gem to a 100 Gems.

It is NOT advised to take this method, this method includes non-safe websites and can potencially carry malicious malware that will affect your computer.

When first added to the game on 8/8/13 as part of version 2.0, inviting a friend awarded 200 Coins, but this was changed 21 days later to awarding 50 gems. The reward originally didn't had any limit, allowing players to exploit it, until an unknown update gave it a limit so that only the first 50 friends that get to join the game rewarded 50 Gems. At an unknown update, the invite limit was reduced to 5 friends, capping the gems that can be obtained to 250

Gems are very hard to get but that doesn't stop the players from finding method of farming and gathering Gems. Down below are the most used methods and how they're done.

Due to the Gem Stable Missions being replaced with Coins, including Long Night Flight, Achievements are now the way-to-go in terms of getting Gems. Players create an Alternate Viking (or Alt. Viking) with an already purchased slot and once they get hold of the Secondary Starter Dragon, some Achievements can be done right away.

There are currently 7 Gem Achievements:

*- Completing the first four Arena will reward the 200

In total, players can earn a total of 900

by completing them all; however, because Cog Master and Incredible Machine Master and can both occasionally glitch and not reward the Gems, and Flight Club can take a while to finish them (not to mention Hero Flight Club Expert requires Trial Membership), some opt to just complete the Stormheart Champion and to an extent, Basic Training, for a total of 250

Once gathered, the players head back to the Viking Selection Screen, delete the Alt. Viking and re-create it again to re-gather the Gems in said Alt.

The Amber Stable is known for including a chest with 300 Gems, which, if bought in full price, it's a literal refund. But, if the player has Trial, its price will be reduced to 240 Gems, meaning that opening the chest will not only refund the 240 Gems, it will also give an extra 60 Gems.

This method is often done along with the Achievements Method.

Stable Missions was home of one of the best ways of getting Gems, each of a variable difficulty and different Gem Reward (Fistful of Gems, Big Sack of Gems, Chest of Gems, Hoard of Gems), but one specific Mission stands out from the rest: Long Night Flight.

The Mission can also be done on each individual Alt. Viking because Membership also applies to ALL Vikings in one account. It was temporarily changed to a normal Mission in May 12th, 2020, v3.8.0, but on August 20th, 2020, v3.11.0, both Long Night Flight and newcomer, Bright Night Flight, reward Hoard of Gems; another newcomer, The Alpha, on Slot 3, rewards a Big Sack of Gems

Retrieved from "https://dreamworks-school-of-dragons.fandom.com/wiki/Gems?oldid=43767"
Community content is available under CC-BY-SA unless otherwise noted.