Gobber is a secondary protagonist in the HTTYD ffranchise, being present through movies and series. In School of Dragons, he's one of the characters present from the start, and even if he's not officially one of the professors, he's in charge of the first trainings of the student.

Gobber's appearance is based on his regular looks from both movies and series.

Gobber is a middle-aged viking of short height and robust complexion. He has a squared face, with close and deep set blue eyes, a narrow aquiline nose, prominent chin and big ears. He keeps his mouth partially open, so his lower teeth are visible, including a stone one. He is bald, but he has blonde facial hair: thick and joint eyebrows, and long braided moustache.

Gobber is well known for his boisterous attitude, bravery, and loyalty. He is proud of being a Viking, and of his skills as a blacksmith [src][src]. He is faithful to old Berk's custom, even if sometimes they are outdated [src], and is knowledgeable in Berk's history [src]. He is also superstitious, and have customs for good luck [src] [src].

He has a good appetite, and like eating fish [src] [src] [src] and chocolate [src]. Maybe for this reason, he likes to fish in his free time [src]. And he's also good at preparing candies [src].

Apparently, Gobber has a poor self-hygiene, and doesn't like to bath [src].

He gives names to his weapons, like a pickaxe named Bernice [src], ballista named Freya [src] and a catapult Old Berta [src].

He is supportive of the young Vikings, giving them freedom of dealing with problems on their own, but being there in case of need [src].

Prior to the facts of the first HTTYD movie, Gobber lost his left hand and his right leg, andwas taken away from the battlefield. He started working as a black smith, and took Hiccup as his apprentice. He's also in charge of training the young Vikings of Berk in battling dragons.

After Vikinks made peace with dragons, he reinvented himself as a dragon dentist, and he eventually rescue Grump from the Dragon Hunters, keeping him as a helper with the furnace of his blacksmith.

For more information on Gobber's backgrounds in movies and Dragons series, visit here.

From the game, we learn that Gobber's family job has always been blacksmithing, and Gobber's grandfather forged the Stormshatter [src].

Gobber's main contribution is in the early quests, where he assist the new player in their training in survival (Wilderness Training) and dragon gliding (The Missing Viking).

Then he usually is involved in quests when some material is needed (like in The Fog Rolled In, Dwindling Flames - Help!, Saddle Up Viking) or we need to build some contraption (Watering Machine, What a Mess!). And of course in quests that involve working with metals (Shiny New Trophies, Gobber's Wheels of Misfortune, Back in the Saddle Again: Part 1). He not only works with metal, but also woodwork (Under Construction).

He is also in charge of the forge for upgrading Dragon Tactics weapons (Ready for Tactics).

Gobber has a small role in building Astrd's axe (What's Going On?) and Lepold's armor (Is Harald Our Last Hope?).

Gobber is in charge of building New Berk's defense, a role he put all his heart into (Home Sweet New Home, A Small Problem, Defending Our Home).

Curse of the Hobgobbler Edit

As seen in HTTYD 3, Gobber is terrified of Hobgobblers and sees them as a bad omen. This expansion revolves around some plan of the twins to invade New Berk with these little dragons, and of course Gobber has a central role. He warns the player about their bad reputation, and the "curse" they carry, in A Gobble Problem. He also provide the Hobgobbler armor set in The Way of the Hob. But by the end of the adventure, he seems to reconcile himself with these dragons (Curse, Broken).

Gobber was Stoick's right-hand man and his best friend. Gobber is the one to give you the quest that marked the post-Stoick update (A New Dawn).

Hiccup is Gobber's appreantice as blacksmith, and Gobber made his prostetic leg, but he's also proud of trainee's ability and inventions [src] [src]. However, he'll always try to make "improvements" to them even if not asked [src].

Gobber thinks Astrid has an eye to design beautiful and strong weapons, just like him [src]. He also helped her setting up the Dragon Tactics stand [src].

This Hotburple helps Gobber in maintaining the fire of the furnace - when it's not sleeping. Gobber acknowledge it's a lazy dragon, and never there when it's needed, but he cares about it [src] [src].

Gobber seems to be a bit impatient and sarcastic towards Fishlegs, mainly because of Fishmeat's mischiefs [src]. 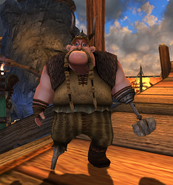 thumb|Gobber in the game
Add a photo to this gallery
Retrieved from "https://dreamworks-school-of-dragons.fandom.com/wiki/Gobber_the_Belch?oldid=36551"
Community content is available under CC-BY-SA unless otherwise noted.