2- Tell Fishlegs about Snotlout getting poisoned

4- Give the 3 milk thistle flowers to Phlegma

7- Shoot the mushroom patch to destroy it

Step 6 tells the player to bring Snotlout to Phlegma but, for unknown reasons, Phlegma will disappear from the location and never return. Due to Phlegma's lack of presence, step 6 is impossible to be solved because the game wants you to meet up with her when she's nowhere to be found.

Solution: Due to the glitch not being quite common, it's hard to encounter the solution for this glitch. It's recommended to either:

A very minor one: whenever the player gets close to the Floral Census, the dragon will pick up nothing and bring to the player.

Sick Snotlout besides the mushroom patch

Close-up of the mushroom patch

Fishlegs at the Floral Census 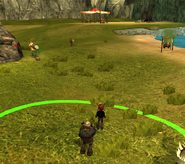 The obstacles that the player has to avoid

The burnt mushroom patch
Add a photo to this gallery
Retrieved from "https://dreamworks-school-of-dragons.fandom.com/wiki/Going_Berserker!?oldid=35112"
Community content is available under CC-BY-SA unless otherwise noted.