The Green Death is a new, non-playable, dragon that can be encountered in the Return to Dragon Island expansion pack. It currently resides in the volcano in Helheim's Gate .

"The Red Death, is a gigantic Stoker Class dragon species in the first How to Train Your Dragon (film)."

"It does not actively hunt, but it has its food delivered to it by other dragons in the nest. It will eat any dragon that does not bring sufficient food; when a Gronckle brought only a single fish, the Red Death from the movie devoured it moments later."

"True to the reputation as the 'queen of the dragons', the only grown specimen seen in the franchise demonstrated savage, menacing, and controlling nature that even a deadly Night Fury was frightened of (not unclear whether the other individuals in the species share this personality). In addition, according to Valka, every nests have their queens or kings, indicating that there could be numerous Red Deaths in the world."

"The Green Death (from Rise of Berk) was stated to be a less aggressive cousin of the Red Death. It is likely the same species, but has been given another name to differentiate it from the Red Death, who couldn't be used in game, as the dragon itself is dead. This may be a reference to the How to Train your Dragon books, in which the Green Death is a species of Seadragonus Giganticus Maximus. "

For more information on the Red and Green Death, visit here.

Outside the Volcano - In LandEdit

Green Death close up (about to attack Harald's ship)

Green Death close up (after distracting it)

Outside the Volcano - In FlightEdit

Green Death in flight (side view)

Green Death in flight (back view) 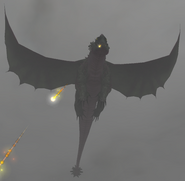 Green Death firing while in flight

Green Death flying back to its nest

Retrieved from "https://dreamworks-school-of-dragons.fandom.com/wiki/Green_Death?oldid=30806"
Community content is available under CC-BY-SA unless otherwise noted.