How To Train Your Dragon: The Hidden World

Grimmel is the main villain in the the third movie of the franchise, How to train your Dragon: The Hidden World, and he is introduced in game in the expansion The Hidden World.

The expansion happens at the same time of the facts in the movie, so the dragon riders have already met Grimmel when the expansion starts, and Berkians moved to New Berk following Grimmel's attacks.

Grimmel is a tall and skinny middle-aged man. He has short and spiky grey hairs with sideburns, thick grey eyebrows, no facial hair and a pale complexion. His face is long and thin, with almond shaped glacial eyes, eye bags, aquiline nose, a big grinning mouth with thin lips. He carries his hands almost closed in a fist.

Grimmel wears a long plain black coat closed on the front by a wide black belt with 2 thinner strips of leather on top, decorated by studs, and a hammered metallic buckle with double pins. He wears a high collar dark brown leathery wrap on his shoulder, closed on the front by stitches, and with decorative studs on the edge. He also wears lblack bracers, with a series of horizontal black armor plates, fixed by studs. Under the coat he wears simple black pants and boots.

On the chest he has crossing belts that are used to hold his weapon on the back and a leather pouch under his right arm. Another belt at the waist carries a bigger pouch on his right side. He carries a metallic grappling hook with a black rope wrapped around it on his left side, and his crossbow with wooden handle on his back. 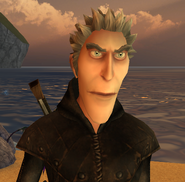 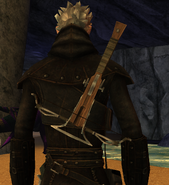 Detail of his weapon

Detail of the device he carries on his left 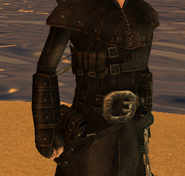 Deatil of belt and pouches he carries on the right

Grimmel has a high self esteem, that brings him to use sarcasm and mockery to others, like when he calls Hiccup "esteemed chieftain" just to say right after he's no equal to Stoick, or when he bullies the player's Viking by making them remember how berkians had to leave their homes in a hurry because of him [src].

This also brings him to underestimate his opponents, putting himself at disadvantage, like when he reacts shocked at the antidote to his venom that the riders could prepare to free Cloudjumper. However, it doesn't seem it's a mistake he'll do twice, and he he knows when to retreat and prepare for a new fight [src].

Grimmel is a dragon hunter mercenary, called by the Warlords to help them in their battle against Berk, with the goal of acquiring all the dragons that berkians are protecting. However, Grimmel is only interested in hunting Night Furies, and he is the reason why Toothless is the last one of his species [HTTYD 3].

In the game [edit | edit source]

Grimmel was first introduced in the game in the expansion The Hidden World, but he was later added to the tutorial quest The New Student, where his attack to Berk serves as the opportunity to leer the flight controls of the game.

Grimmel first appears in the quest Parley, where he invites Stormheart and the player (as representative of New Berk) to talk to him at Old Berk. His offer is simply to leave each other's alone, so there will be no need to cross swords.

In Throwing the First Punch, he poisons Cloudjumper with a dart, during a riders' attack to the warlord's camp on Glacier Island.

He then reappears to guide an attack to New Berk in Defending Our Home.

While Nikora at first is worried about the spreading of the warlords' influence in the archipelago, she seems to ponder Grimmel's offer of mutual no-offense. However, she then helps the raiders with their attacks to the warlords' camp, just to run away when things get complicated [src].

Grimmel calls Hiccup "esteemed chieftain", but in truth he thinks that Hiccup is "no equal" to his father Stoick. At any rate, he's more interested in Toothless than in Hiccup. [src]

Grimmel thinks thinks that "peace with dragons is a foolish notion" [src], and call the riders "do-gooders" that are bound to fail if they try to stop "progress", as he calls his use of dragons to create new inventions [src].

Instead of directly riding a dragon, Grimmel use a contraption that flies with the help of 4 Deathgrippers. It looks like a cage, that hangs from 4 axes, the extremes of which are connected to a Deathgripper with means of an harness. 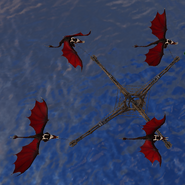 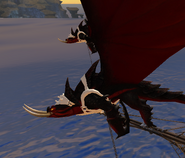 Add a photo to this gallery
Retrieved from "https://dreamworks-school-of-dragons.fandom.com/wiki/Grimmel?oldid=45281"
Community content is available under CC-BY-SA unless otherwise noted.