The Grimora is a type of parasite that can be encoutnered in the Rise of Stormheart expansion pack. It currently resides in the vernal pools of Hobblegrunt Island.

From one of the Missions in Rise of Stormheart:

"The Grimora are worm-like parasites with tiny wings and sharp teeth that latch onto passing dragons. Once they latch on, they crawl under a dragon's scales and inject a toxin that drives a good dragon mad, They're relentless, and we only know one of their weaknesses: salt."

For more information on the Grimora, visit here. 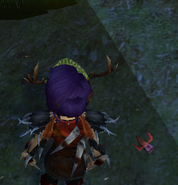 A Grimora attacking The Edge in Prepare For the Worst quest

The Infected mother Triple Stryke holding Dagur hostage
Add a photo to this gallery
Retrieved from "https://dreamworks-school-of-dragons.fandom.com/wiki/Grimora?oldid=23951"
Community content is available under CC-BY-SA unless otherwise noted.