As for v3.0.0, he's responsible for opening the entrance to the Hidden World Annex in The School.

Harald's appearance indicates that he is a man with around twenty years old or more, he has a blonde undercut hairstyle and a pointed beard. His outfits are designed to not only provide warmth in cold locations but to also give comfort and allow the skin to cool when venturing through hot locations. Surprisingly, Harald is the only character to have an outfit change between the expansions.

In Battle for the Edge, Harald wears a light long-sleeved shirt underneath a brown tunic secured by a red sash belt and a brown belt, which has a couple of mini-bags that allow him to carry items along the way. His boots and gloves are dark brown, and have fur on them, like his tunic. On his left shoulder is a triple-layered shoulder-to-arm plate suitable for movement, while his left forearm is wearing a bracer; the shoulder plate is most notably used by Leopold as a perch without hurting him; the belt that keeps the shoulder plate in place also keeps his sword properly holstered on the back. 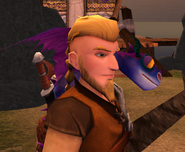 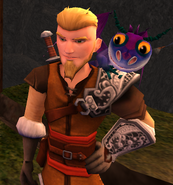 In Rise of Stormheart, Harald's appearance changes a little. He now has Stormheart-esque facial paint and a banner symbol on his right arm. His general clothing took a more light approach, it lacks the fur and the sleeves are visibly shorter. The red sash belt is now blue, and both his boots and gloves don't have fur anymore. Also, his gloves were replaced with Stormheart-esque bracers. 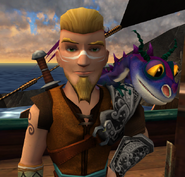 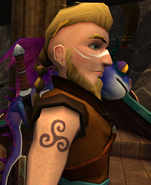 Harald is a man full of self-confidence, as he attracts his boat at Dragon's Edge docks and roams around when nobody is around [src].

He doesn't seem to have much knowledge of dragons, as he doesn't recognize a Snaptrapper in Multi-head Bonanza. However, he does know how to open a Dragon Hunter cage, and is willing to help the Dragon Riders rescue dragons [src]. In Stuck on You, Harald was the one who suggested a way to guide the Armorwing, showing that he is smart and quick-witted.

Most notably, he has a manipulative nature, well-hidden behind an apparently caring and emphatic behavior. He can obtain what he wants by providing convincing excuses, like when he wants to avoid Skulder [src], or when he succeeds in remaining alone in Dragon's Edge while everyone else goes to rescue the dragons on Scuttleclaw Island [src].

He gains trust by helping out in nearly everything, so that even Astrid, that had reserves on him, keeps her guard down. But in the end he reveals himself for what he is: a thief, that takes advantage of other's trust for his own benefit [src].

He will lie at any time to put himself on the winning side, like when he says that the Dragon Hunters stole the dragons from him [src], when in reality, he sold them to the Hunters [src]. He is also a coward, as he would switch allies and help if he finds himself in trouble [src].

Before the facts presented in Battle for the Edge, Harald is a pirate that makes a living with thievery, manipulation and shady business with the Dragon Hunters. While he crossed path many times with Skulder and even Heather knows him, the dragon riders does not know about him at all. [src]

Harald can be found on:

In the game[edit | edit source]

Battle for the Edge[edit | edit source]

Harald is introduced in the quest Threat of the Dragon Hunters. He feels "at home" at Dragon's Edge, as he declares it was one of his haunts during his journeys. He presents himself as a trader and navigator, and explains that he was forced to stop at Dragon's Edge due to a conflict with Dragon Hunters, that wanted to steal his wares, and his boat got damaged in the process.

He trained his dragon Leopold, as he explains in Home Sweet Dragon's Edge.

In Multi-head Bonanza, he joins the Dragon Rider at Zippleback Island.

In Epic Catastrophe, he once again follows the riders to Dark Deep, and helps to rescue a dragon from a Dragon Hunter cage.

In Stuck on You, he joins the player and Snotlout to Armorwing Island, and he seems particularly interested in the Armorwing. He's the one to suggest a way to guide the Armorwing.

He then seems to lose interest in exploring the nearby islands with the Dragon Raider to help dragons, as in both Archaeologist, Dragon Trainer and Dragon Hunter Troubles he stays at Dragon's Edge while everyone else flies out. But it's a trick, as Skulder knows he is actually a pirate, and he uses the time alone on Dragon's Edge to steal everything, including the Book of Dragons.

The player discovers in Pirate on the Run that Harald stole the Armorwing and the Catastrophic Quaken, and he is seen leaving Mudraker Island in What About the Archaeologist? where he trapped Skulder in a Dragon Hunter cage.

In This Will not Stand, Harald sends a ransom note to Dragon's Edge with Leopold, asking for the telescope as a price for returning all the things he stole.

Harald is seen again in The Waiting Game, where he falls in the trap prepared by the Dragon Riders. He then has no other option, but to help them rescue the dragons he stole, and are now at the Dragon Hunter camp.

He will bring the player to the Hunter's camp in Heart of Darkness, from which he will escape in an unspecified way.

In Battle for Dragon's Edge, Harald is seen sailing away with a mysterious object he stole from the Dragon Hunters.

Harald is mentioned in the first quest, The Mystery of the Fog, by a Dragon Hunter. He says Harald is back and doing business in Auction Island.

The player finds out he sells dragon teeth to the Shifty Storekeeper, but just as the Riders follow that trail to reach him, he finds another dealer and stops his contacts |[src].

Astrid is able to track him in Following Harald's Trail, but can only recover a note. Harald is beginning a new business with some "magic bones". It turns out Harald found his way to Dragon Island, and is stealing the Red Death's teeth, claiming they can turn dragons to stone (and using fossils as proof).

Harald finally appears in The Heart of Dragon Island, declaring he's been stranded on Dragon Island for days, and his ship sunk. Of course, he's lying, and he tries to keep the Riders out of the volcano. Turns out, he wanted to hide the mysterious orb he stole from the Dragon Hunters (Battle for the Edge expansion) inside the volcano, but he discovered the Green Death and dropped the object there. |[src]

In Mission Start! he takes advantage of a moment of distraction to sail away from Dragon Island on his hidden boat, but he's stopped by the Green Death. He then even tries to shoot her. He succeeds in escaping |[src] , but leaves the orb behind.

In The Hidden World[edit | edit source]

Harald blowing up the geyser elevator at The School

While it doesn't require the Expansion to get this, in v3.0.0 - Hidden World Update, when the player enters The School after updating the game, the player gets a cutscene of Harald implementing a bomb on top of the geyser elevator, with Astrid and Hiccup fending him off on their respective dragons but it's too late, the bomb begins to ignite as it's descending down the geyser elevator and explodes, breaking and shattering the geyser elevator and the underwater grounds, bringing the Viking statues and the boat down to the giant, underground hole created by the massive explosion and opening the entrance to the Hidden World Annex.

He is after the warlords’ plans at the same time the player is. He requests to talk it out back at Auction Island but the warlords show up and knock him out. When you arrive at the island with Astrid, he is disappointed she is with you, thinking he implied Stormheart wanted to talk to you alone. He tries to convince you into accepting Stormheart’s offer and even Astrid has to admit he has a point.

Harald doesn't seem to get along well with Skulder. He describes him as a "strange man", an "unpredictable man" that could "act irrationally". Why Harald says he doesn't know why the Archaeologist doesn't like him, he says that he ran into him once and Skulder accused him of trying to hurt him, for apparently no reason [src].

Harald mentions that he dealt with the dragon hunters several times in the past [src], and that they wanted to steal his wares [src], however, this is probably not true. Harald sold the Quaken and the Armor Wing to the Dragon Hunter for a high price [src].

Later, a Dragon Hunter says that Harald has "burned many bridges around these waters", and many Hunters have a grudge against him [src].

Heather saw Harald trading with the Dragon Hunters at least once, and she says about him: "That Viking is bad news." [src]

Johann says this about him: "Harald Forkbeard is not a man to be trifled with [...]. He will tell you exactly what you need to hear to let him into your grace, then stab you directly in the back! I don't mean that figuratively, either. I've got the scar to prove it." [src]

Harald uses a boat as his main way of transportation, that features a wooden sculpture of a horned dragon head on the front, and colorful shields on the sides.

The sail features a black symbol, similar to the dragon head on the front of the boat.