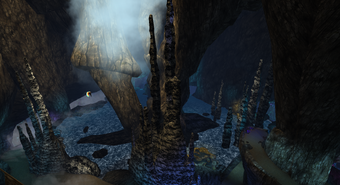 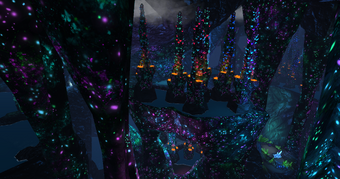 Hidden World Annex is an expansion-exclusive location added in February 21st, 2019, as part of the v3.0.0 - Hidden World Update. to unlock it, player have to purchase The Hidden World available for 1,250

The main entrance to the Annex is a cylindrical-esque cavern with a wide opening at the top, and a couple of stalagmites-esque rock formations and a freshwater lake with tides; the top of the cave is filled with steam fog from the multiple waterfalls in the chasm. The player spawns in a large, pillar structure with the World Map landmark and Valka nearby, and following the pathway leads to a larger freshwater and to the outer section of the Annex. In the March 1st, 2019 patch, an adult Stormcutter and a Dramillion can be seen flying around. 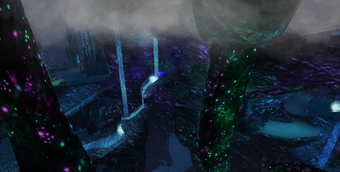 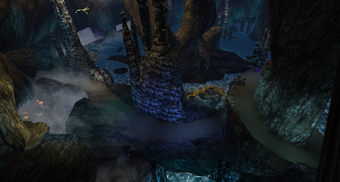 The outer section of the Annex is a wide-open, deep, subterranean cave filled with bioluminescent fungi, algae and crystalline structures, the edges of the opening cave are filled with steam fog that serves as a landmark to guide players to the entrance of the opening cave. By following the pathway from the starting pillar, the player will reach a large, knee deep lake with a double watefall stream by the pathway and another large lake to the right, both lakes include small shores, all with bioluminescent fungi and algae. An adult Shockjaw can be seen flying around in this section. 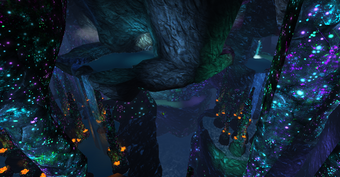 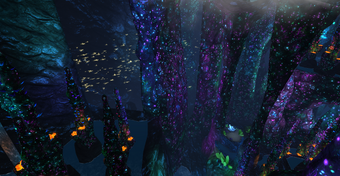 Following the left section, there's a wide cave opening that is blocked by an invisible wall with a swarm of 2D Fireworms based on How to Train your Dragon: The Hidden World coming out of it, standing by it will give off a faint yellow glowing effect in some sections, a Windwalker can be seen flying by it. It's here that we get to see the vast amount of rock formations with a variety of bioluminescent fungi and freshwater lakes, they come around in a similar fashion as to a forest, with about 6-10+ stalagmite-esque rock formations filled with blue and pink fungi as well as orange bioluminescent egg-esque things also based on The Hidden World. There's also a small amount of blue and green crystalline formations, some can be used as a landmark to guide players through this wide-open cave, and purple and blue algae can also be seen around the area along with multiple waterfall formations coming from the opening cave. A Titan Sand Wraith can be seen flying by the swarm of Fireworms and the "forest" of fungi-filled rocks, and an Eruptodon can be seen flying by the "forest" of fungi-filled rocks. 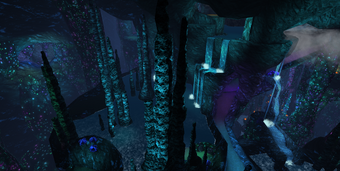 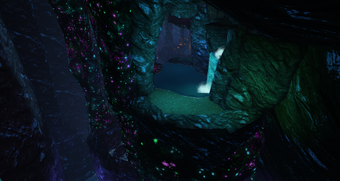 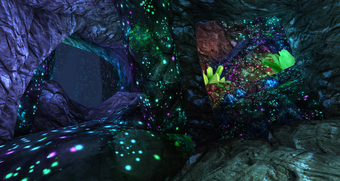 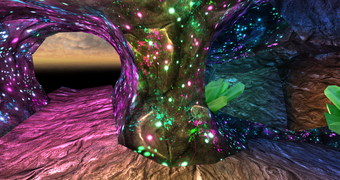 The very end of the cave

To the right of the pathway, there's a wide, large opening in the cave with a Groncicle flying by, this hole is used in What Is This Place? quest, where the player will find the Light Fury hovering in the hole. The hole is filled with fungi-filled rocky walls and normal walls thought the end of the hole is mined with fungi-filled rocks and algae as well as green crystalline formations. The player can't go any further beyond the crystalline formations as there's an invisible wall blocking the players from going out of bounds with the opening at the very end of the cave.

The Hidden World Annex has an interesting addition that no other location has: Dragons get to have their own distinct bioluminescent patterns.

Retrieved from "https://dreamworks-school-of-dragons.fandom.com/wiki/Hidden_World_Annex?oldid=32990"
Community content is available under CC-BY-SA unless otherwise noted.