The Hobblegrunt is a Stoker Class dragon released on August 14th, 2014 for a limited time. It was formerly only available during the rare limited sale periods, or, if one was lucky enough, as a prize in the gold tier chest from Battle Events.

"The Hobblegrunt has a single horn and and an expandable frill surrounding its head. It has clawed wings, small arms and big legs like a Deadly Nadder. It also appears to have long neck and tail as well. Its tail has frilled edges, similar to that of a Monstrous Nightmare.

"The Hobblegrunt is able to change its colours like a chameleon, and this ability is similar to that of the Changewing. Instead of doing it for defensive purposes, it changes color depending on its mood. It can use this ability to calm other dragons. Using the large frill on its head, the Hobblegrunt is able to detect the subtle shifts in temperature, barometric pressure, and the emotional states of nearby dragons or humans."

For more information on the Hobblegrunt, visit here.

The Dragon Hunters for some reason seem interested in the baby Hobblegrunts, probably because they are easier to capture. Adult dragons don't seem to have some defensive strategy, as they apparently don't fight back to the attackers.

The player needs to approach nesting Hobblegrunts on Hobblegrunt Island, without disturbing them, which seems to indicate that they are easily scared dragons.

A baby and an adult Hubblegrunts are found trapped in a Dragon Hunter's cage along with other dragons at Hobblegrunt Island.

Ever since the release of the Hobblegrunt, it has been talked about and discussed between players due to the said released Hobblegrunt looked nothing like the already officially confirmed Hobblegrunt, going as far as to generate discussions about this Hobblegrunt being a sub-species of the real Hobblegrunt while others just call it "a lazy job" from the developers.

Things escalated really quickly with Dragons: Rise of Berk's February 16th, 2016 release, Threadtail, which looked exactly like the SoD's Hobblegrunt. Players that were already disappointed with the SoD's Hobblegrunt release started losing more of their patience as they started wondering how could they confuse these two different dragons, one of which was shown multiple times on screen during How To Train Your Dragon 2.

It wasn't until March 27th, 2017, Brian Yoon, one of SoD's Narrative Designers, cleared up the confusion of the Hobblegrunt vs Threadtail confusion:

The Hobblegrunt wasn't going to originally look like the Threadtail, instead, it was going to have its own model, and to an extent, the same for the Threadtail. But, back in 2014, the developers required the confirmation of DreamWorks to release one of the two models. One was released, and the other was then revised and released, resulting in two living Hobblegrunts[1].

What might've happened was not only did the SoD developers forgot what an Hobblegrunt looked like when releasing the model, neither did someone at DreamWorks, promptly resulting in Dreamworks calling the background dragon model a "Hobblegrunt" and allowing SoD to release the wrong species model.

Because of this, SoD can't just rename the dragon due to Dreamworks "officially" naming it as a "Hobblegrunt".[1] 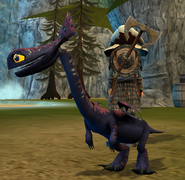 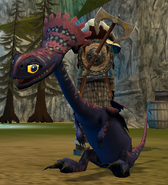 Size comparison between a Viking and a Baby Hobblegrunt 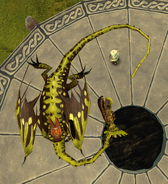 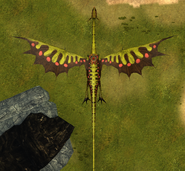 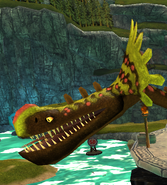 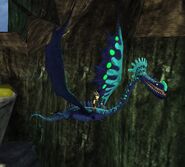 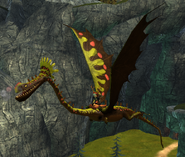 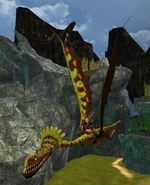 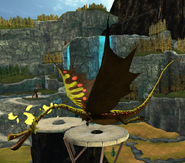 Hobblegrunt egg as advertised through Trader Johann's deals.
Add a photo to this gallery 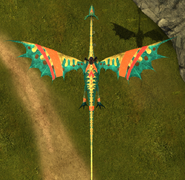 Upperwings, legs and tail patterns
Add a photo to this gallery
Retrieved from "https://dreamworks-school-of-dragons.fandom.com/wiki/Hobblegrunt?oldid=39422"
Community content is available under CC-BY-SA unless otherwise noted.