This is the menu that appears once the game loads.

are shared between Vikings in a same account, but not Coins

For each Viking, it show the UDT points and Stars, and eventually the name and crest of the Clan they belong to.

On the right, it shows your Gems

count, and a button to switch on/off the multi-player option.

On the bottom, the Play button will transfer you to the location you last visited in your previous game session. You can select alternative destinations in the buttons above: Farm, Racing, Stables or any location in the World Map.

This is the general User Interface you will experience with during normal playing.

On the left, you can see details about your Viking: their current level (max is 50), their Health Points (relevant in Battle Events, their UDT stars and points.

Active Dragon: its level (max is 50), its Health Points /Dragon Energy and the Dragon Happiness icon. For both Viking and Dragon, the yellow circle around their icon shows th level progress: when the yellow circle is complete, your Viking/Dragon will level up.

On the right, you can see your Gems

balance, and shortcuts to the Store, the World Map and the Options Menu (see dedicated tab). The icons on the right bottom control actions for your Viking and Dragon: 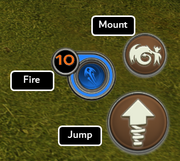 When you mount your dragon, the menu will change to this shown on the left. 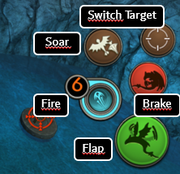 At this point, the menu will change again: 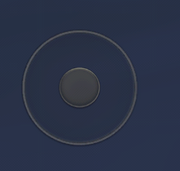 On mobile, the arrow keys are replaced with a small circle located on the bottom left corner and you have to hold and drag the green circle in order to move anywhere, if you gently hold and drag the circle, you can walk instead of running.

In order to change the zoom, vertical and horizontal camera, you have to place two fingers on the screen and separate them/stick them closer, move them upwards/downwards and to the sides respectively.

Be careful, the circle doesn't just control the viking and the dragon, but it also controls the general camera, resulting in long, wonky turns. To avoid accidentally falling everywhere or hitting every rock, it's recommended to take it slow by attempt at walking instead of running (only run in places where falling is less likely) and, in flight, remember to brake frequently.

Another thing that you have to be careful is if you hold and drag it to run/fly and either your finger is dragged too far away from the circle or you accidentally touched the outer part of the phone, the circle will immediately go back to the middle, resulting in sudden lost of control. The same applies to the right UI but has a second problem: the phone's navigation bar covers the buttons, making you unable to control the viking/dragon within a few seconds.

Retrieved from "https://dreamworks-school-of-dragons.fandom.com/wiki/How_to_Play/Starting_Menu?oldid=27046"
Community content is available under CC-BY-SA unless otherwise noted.