Impossible Island is a semi-exclusive location that requires Secret of the Leviathan to be fully explored. This is where the expansion will take place in, similair to Icestorm Island and its sub-locations.

Impossible Island is an enormous, smoothly rocky island with a few shores, in one of the shores, after purchasing the respective expansion, Mala's ship and the two minigames' ships (Cogs and Incredible Machine) are docked along with a small camp. 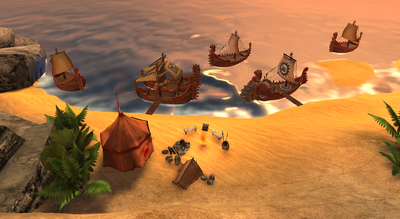 To the right of the camp is where the World Map is located at. To the left of the camp, there's a small hole surrounded by four columns which becomes somewhat meaningful in Escape!.

However, the island's biggest show isn't the isle itself: it's the deep, enormous cenote right in the middle, unveiling two long-lost Defenders of the Wing temples. 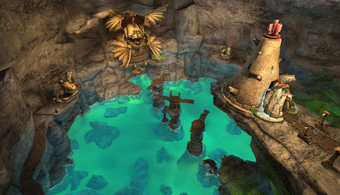 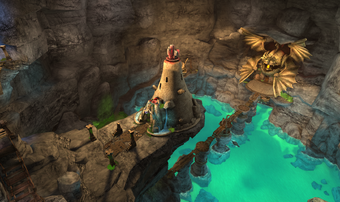 The cenote after being visited

The cenote is a multi-layered, deep, wide drop, with some vegetation, and long-lost artifacts and buildings of the Defender of the Wing's old civilizaton. At the beginning of the pathway, there's a small entrance nearby some broken statues, the pathway itself consists of broken bridge and arches, with multiple holes the player has to be careful with when using them.

Neither of the temples can be normally visited without the expansion, in fact, in order to unlock the Defender Ruins, you need to complete the first Cogs and Incredible Machine level during Death Traps of Impossible Island and then unlock the door during said mission, only attempting at entering the temple, it will ask you to buy the Secret of the Leviathan. Attempting at getting into the 2nd area which include the Flora Labyrinth, the bridge and the 2nd temple will result in the player getting teleported back to the cenote's pathway entrance after reaching a certain height.

The Defender Ruins is an ancient, pyramid-esque temple, with a water wall on top of the gated, cog-locked entrance. It has an old stone pathway and columns, the columns could've been either curved or straight arches that fell down. For more information on the inside, go to Defender Ruins.

Near the end of The Water Conundrum and during Welcome to the Jungle, the player gets to go through a flora labyrinth, which during the mission, is full of Flame Whippers and some walls can be easily chopped down. While the labyrinth can be revisited, the Flame Whippers and weak walls are quest-exclusive. The player can't just jump over the walls as they are full of invisible walls.

During the course of the quests, you were unlocking the bridge to the next temple which during the course of three quests (Approaching the Ruins → Key Finders → Return to the Impossible), you are told to visit the The Ship Graveyard's Underwater Section to look for a key for the next temple and to free Skulder. This will lead you to the second and the largest temple, The Defender Labyrinth. 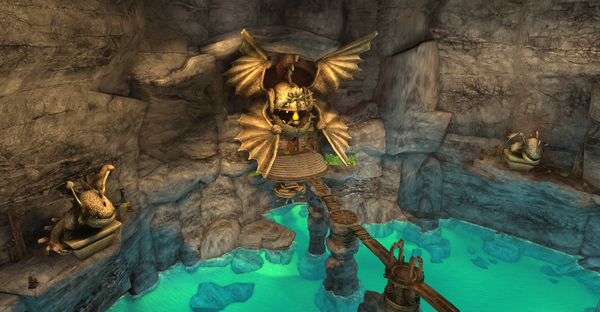 The Defender Labyrinth is a four winged, Eruptodon-looking temple, with retractable stairs that come out after the bridge has been fully restored back in place and a small brazier that is used to scare the Flame Whippers away. On both sides of the temple, there's two Eruptodon statues which can be reached by walking by a series of jumps. It should be noted that after completing the temple, everytime you get down to the cenote, the game will respawn you on the bridge and not on the cenote's pathway. The only way to go back up is either go through the Defender Labyrinth again or do another series of jumps to get up to the Defender Ruins which is possible to do so.

Surprisingly enough, both temples can be replayed, though the Defender Labyrinth has a few triggers that should and shouldn't be triggered, which often result in either a platform without collision detention or an entire section of the map unloaded.

After completing the expansion, the Krayfin would appear in the middle of the bridge during The Fate of the Leviathan but after v2.7.0, the adult Krayfin swims in circles and it is possible to land on him and "ride" him.

Retrieved from "https://dreamworks-school-of-dragons.fandom.com/wiki/Impossible_Island?oldid=26934"
Community content is available under CC-BY-SA unless otherwise noted.