Isle of Berk or Berk is one of the 5 major locations, home of most of all the Characters, steps from multiple quests and even home of 5 entrances to 5 different important locations/mechanisms.

Snotlout's house along with the rest
Isle of Berk is a enormous, wide island featuring multiple houses, including houses of the main casts (albeit in a different location and position), and paths for players to take and/or take shortcuts by jumping and gliding to. Due to the multiple paths and "floors", quests that involve looking for x amount of items require a keen eye as they are often hidden very well.

Following the path to the "highest" floor contains Hiccup's house with a staircase leading to The Great Hall, where Valka and her dragon Cloudjumper are located beside it. If the player completed Explore the Dark Depths quest, they will unlock the entrance to Whispering Death's Cave which is located behind Cloudjumper. There's also a hidden staircase that leads to a path that is often used to hide items and as a shortcut to get to the Trading Post or the sea.

One of the most noticable, well-known features of Berk is Gothi's Hut: Gothi's Hut is a small, wooden house with a boat-esque roof and a small hut on the side, supported by wooden poles, and connected to some stairs and wooden paths. It's located right on the tip of the highest, tallest, biggest, layered mountain in Berk and it can be reached with either a flying dragon or attempt at climbing it, though it's not recommended as there's some parts that are too steep for players to climb.

Around 5 quests require a specific, quest-only location that turns the environment around Gothi's Hut into a whole teleporter, which teleports you to the location counterpart.

On the left side of Astrid's house, a large wooden bridge leads to the second section of Berk and it's where the entrance to Sven's Farm, a Dragon Tactics post and the entrance to Loki's Maze are all respectively located at, said location is also where some items can be hidden, so remember to check this section when searching for items. 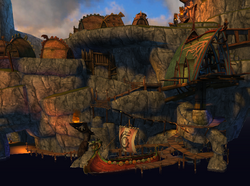 The docks and it's multiple paths

The beach with the two fishing spots

Behind the World Map, it's where the Stables are located however, the only way to reach it is by either using a flying dragon or by jumping towards it from the World Map.

As mentioned before, Berk has two fishing spots:

Retrieved from "https://dreamworks-school-of-dragons.fandom.com/wiki/Isle_of_Berk?oldid=31344"
Community content is available under CC-BY-SA unless otherwise noted.