Added in 10th of October, 2013 as a part of v5.0, the Jobs Board is a list of Fishing and Farm Jobs that once completed, it rewards Coins and Farming XP. They're located in a cart with a quest exclamation point or a literal Job Board located in The Lookout by the Greenhouse, The School and Berk, both by the Store. 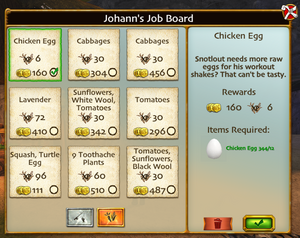 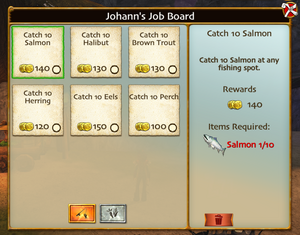 While the Fishing Jobs have no major difference whatsoever, they will always be the same Jobs and will always ask for the same quantity, the Farm Jobs have a wide range of variety, all with its own amount of Farming XP and Coins. There will always be 9 Jobs on display, you cant rash them by selecting the chosen Job and click on the bin icon, and get a new one after a 10 minutes wait which can be sped up for 1 Gem or if on mobile, remove 4 minutes with an ad.

If a job doesn't show the icon for a certain vegetable or animal product, that job is probably glitched. It won't recognize that item in your backpack, making it impossible to claim the reward.

**= For wool, the max. amount of feed and minimum profit are shown (i.e. using normal sheep). Using a Target sheep (that gives 2 bundles of wool) will increase the profit.

Cost and profit are calculated with normal sheep. If you have a Target sheep the profit will be higher.

Cost and profit are calculated with normal sheep. If you have a Target sheep the profit will be higher.

Retrieved from "https://dreamworks-school-of-dragons.fandom.com/wiki/Job_Board?oldid=37441"
Community content is available under CC-BY-SA unless otherwise noted.