The Light Fury is a Strike Class dragon that was released on February 21st, 2019 as part of v3.0 and the third dragon not available for purchase at the Store.

Just like the Night Fury, in order to receive your very own Light Fury, players need to purchase 3 months or higher Membership or the Trial Membership, and have an open slot for it. The Membership has to be active in order to have constant access to it. After the Player's Membership ends, the Light Fury will take up a Stable slot.

"The Light Fury moves as fast as Toothless and shares his ability to blend into the sky — even during daylight hours.
With her white coloration, the Light Fury hides seamlessly in clouds, sea fog, and distant horizons. Although skittish and skeptical, the Light Fury also shares Toothless' deep sense of empathy and will always wield her plasma blast to defend any in need.
Temporarily transforms each scale into a reflective surface that mirrors the Light Fury's surroundings, essentially rendering her invisible."

For more information on the Light Fury, visit here.

The Light Fury is generally considered as a variation and sub-species of the Night fury though treated as a distinct species, to which the body built are very close to each other with some properties like the fins being a very present factor in both. Though, the Light Fury has a more svelte, slim body with a single thin, smooth fin across the dorsal structure with a white coloration and a few purple bits in the eyes. The fin structure is also present in the limbs, with both the sacrum and the tail also presenting a smaller pair of fins. In spite of the Light Fury's wingspan being bigger and wider, she's a lot smaller than the Night Fury - the fire also differs with the Night Fury's plasma being blue and the Light Fury's plasma being purple with a shockwave whenever it hits a solid ground. 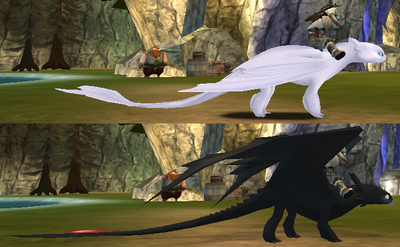 With two Furies received from buying Membership, the biggest question pops in: Which one is better? The last of its kind Toothless the Night Fury? Or the elusive cautious non-near extinction Light Fury? The two Furies belong in the same genus which means both have nearly the exact stats, from Max. Speed to Acceleration. Though, because the Light Fury relies on stealth flight, the Light Fury's flight is much more smoother than the Night Fury. The turning and pitching flow smoothly, they're a bit less sensitive which allows an easier control over the Light Fury - the Night Fury's turning is slightly smoother but the pitching is rather heavy and in spite of not affecting the speed itself, they're quite sensitive which can make it easier to lose control; the overall flgiht controls of the Night Fury are dragging and heavy which can be discomforting to some players.

Another detail is how the turning and pitching differs slightly: The Light Fury seems to have a better pitching over turning, the pitching is much more quicker which allows a quick ascend, while the Night Fury has a better turning over pitching, the sensitivity of the turning allows a quicker turning in spite of being easier to lose control; both have the same characteristic of the pitching increasing their speed tremendously though due to the Light Fury's smoother yet sensible pitch, it's easier to break from the pitch speed boost when it gets out of control. When it comes to Thunder Run Racing, the Night Fury seems to have a better acceleration start giving a better total time, but strangely enough, the Light Fury has the quickest lap times, though it is possible for the Light Fury to have a quicker total time and quickest lap time.

The Light Fury has a smaller Firepower than the Night Fury in spite of both doing the exact Base Damage, Fire Range and Shot Limit. The Cooldown and Full Reload Speed share the same speed, and the Fire Range (using Unity Units which are meters unless the Developers changed the unit used) shares the exact same measurement of 62 meters, or using the 1-5 Icd Sheet Scale, both get 2 out of 5. The biggest difference between each is the Critical Hit Chance, the Night Fury has a 23% while the Light Fury has a small 15%, however, the Night Fury won't increase its Critical Hit Chance while wearing the Alpha Look, only its Base Damage will increase from 28 to 31.

Dragon Tactics gives a whole different set of stats, the Furies have a different set of statistics: The Light Fury is Defense over Attack, in contrast to the Night Fury who's Attack over Defense. The Health and Healpower are generally bigger than the Night Fury, with a higher Defense and has the possession of Camouflage which boosts the dodging up to 75%, and the 2nd attack, Sky Shot, has a chance to inflict burn to balance the Night Fury's Tactics, a Boost Stat-type Action that increases not only the Defense to 50% but also increases his Firepower up to 25% and increases his Speed by 50% as well. The Night Fury also has a higher Firepower and Critical Chance though the Attackpower seems to remain the same.

Who's better in Dragon Tactics? It's all up to the player, the Light has a higher Health, Healpower and Defense, with both a Long and Mid range attack and a Defense boosting Action that allows a higher resistance when needed but can force the Light fury to remain clsoe to an opponent for the Sky Shot, whereas the Night Fury has a higher Firepower and Critical Hit, two long range attacks and a Stat Booting that boosts the Movement, Firepower and Defense though long ranged attacks tend to be easier for the opponents to avoid. Both with pros and cons, it's up to the player's choice on personally deciding who's better and who's worse.

Having been released at the same time of the expansion, the Light Fury has a great role in it. She's seen in the very first quest, Hidden World!, and again in the following ones, The Problem With Warlords and What Is This Place?, when she guides the player to the Hidden World Annex.

Later, in Where Do We Go From Here?, she will show the player some helpful mushrooms to use as an antidote to Grimmel's venom.

Behind a Membership Wall Controversy

The Light Fury, a newly announced dragon from the trailers of How to Train your Dragon: The Hidden World, possibly from the same family or genus of species as the Night Fury, the eagerness and hype for the release of the Light Fury in School of Dragons was very awaited, with players speculating over whether or not they would have Light Fury eggs or if it was going to be the dreaded decision: Make her Membership exclusive.[1]

The release of the #WhatLiesBeneath poster with a close-up of the Light Fury's eye only increased the eagerness to train this elusive dragon. The quote "One day you may become worthy of training this elusive new dragon." made players' speculation about the release of Light Fury eggs or received during than expansion more plausible, specially the former as the Light Fury seems to have more of its own specimen as seen in the trailer and Dean Deblois has confirmed said speculation[2].

In February 21st, 2019, the dreaded decision became reality: Just like the Night Fury, Light Fury also requires Membership. When players all over the forum and YouTube pointed out how unfortunate that the Light Fury requires Membership to unlock her and from there, the argument of the unfairness of the Membership is brought up from the grave. Players complained how wrong and unfair it was for the Light Fury to be behind a paywall[3][4] and how it doesn't make any sense as there are more of their kind as shown in the trailer[5][6] and it was confirmed by Dean DeBlois that the Light Fury has more of its kind, unlike Toothless.[2] Players were also disappointed how the Light Fury can't be named though, the developers possibly wanted to keep it close to the original source but that would imply players are receiving the Unnamed Light Fury as opposed to a normal, wild Light Fury.[7] Some players aren't as surprised as the Light Fury is essentially another"money-making" dragon for companies to take advantage of.[8][9]

This quote became target of accusations of false, misguiding, misleading promotion for the Light Fury, as it restrictedly suggests that any player would be able to tame it after some hard work in gathering gems for an egg, for example. Some complain how it felt rude and disrespectful[10] from the developers to have the audacity to pull such a misguiding promotion on all the hype of being able to train the Light Fury, teasing the players about it[11], only to make it Membership exclusive, forcing players to waste money or 300

just to play with her. 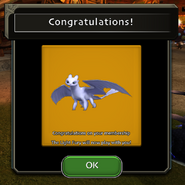 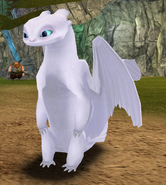 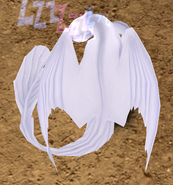 Shockwave from the plasma blast's collision

Size comparison between a Viking and a Light Fury

Close-up of the scales reflecting light

The Light Fury flying in circles during Hidden World! quest 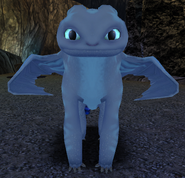 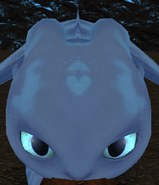 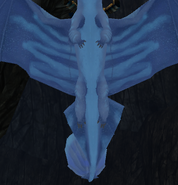 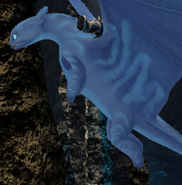 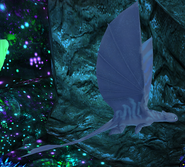 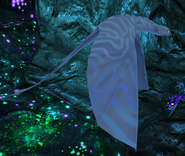