Loki's Maze was first introduced in October 16th, 2015 as "Loki's Maze of Mayhem". It's a gigantic, long cavern filled with 4 to 6 mini-games for the player to overcome and reach the reward, always including Ruff and Tuff's Store (which are 4 Mystery Chests of all the 3 different kinds). When it came out, it was just a small mini-game and something new to the game, but its popularity grew and has become a thing throughout the years, even getting two holiday counterparts: Christmas and Spring.

Whenever you complete the maze, you are rewarded the said prize but you can only receive it once, any attempts at completing the maze form the prize would instead reward you 100

Just like the exclusive Animals, don't expect the Maze to be always released as the developers can forget about it and entirely skip it.

On September 27th, 2018, Loki's Maze of Mayhem was renamed to Fright of Passage to fit with the origin of Dreadfall.

The maze has a number of courses, though they always differ slightly, if not, at all, and each maze has a different course pattern.

A Mystery Maze Chest is a randomly spawned chest with 2 color variations: blue and red. Each act exactly like Mystery Chests, they have their own preview though unlocking them has a high change of giving an item that doesn't appear on the preview. Unlike the Mystery Chests, these are free.

They can be found either in the wide open view of the player or in secret locations that require the player to explore a little futher. It's unknown what they overall give.

Down below are the currently released themed-mazes: 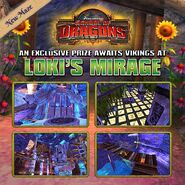 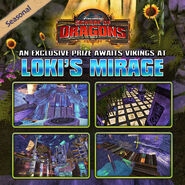 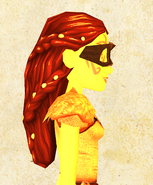 Retrieved from "https://dreamworks-school-of-dragons.fandom.com/wiki/Loki%27s_Maze?oldid=30337"
Community content is available under CC-BY-SA unless otherwise noted.