This was the Alpha stage of the Cogs minigame, to the real game, go here

Mysterious Gear Minigame was a place-holder for an early alpha stage Gear Minigame (added in v2.5.0, December 21th of 2016) whom could be discovered in The School. This has been fixed in 22th of December, 2016.

The Encounter Spot was between the "hallway" to The Wilderness and The Lab and, in order to encounter the Minigame, you had to walk around the area in a similiar Pokemon fashion.

When triggered, the screen would change to the Minigame's.

The background consisted in 3 squares (one black, one slightly grey and another brown) glitched up. As for the main screen, it was a large brown square with an "X" button on the upper right corner. Down at the bottom was a small menu without options.

Inside the Level Select, there were only 2 levels (both with 3 empty stars). When a level was selected, the screen would flip.

The first level consisted in a brown gear on the right side and a gear with a blue target texture on the left side.

On the top corner was the timer and the number of moves below it. Below both counters was the Start button (the Option icon) and the Reset button.

The objective was make all the gears rotate, the starting point being the Blue Gear. To place a gear, the player had to hold and drag the gear to the screen, whom would immediately hold onto another gear when detecting the surface of the closest gear.

The player only had 1 gear (an untextured gear) to complete the level.

The second consisted in 2 brown (one in each corner) and one blue gear (with what it seemed to be a broken "switch" figure) on the top of the screen.

While the first level had the Blue Gear as the Statting Point, in this level, the Starting Point was the left side's gear.

This time around, the player has: 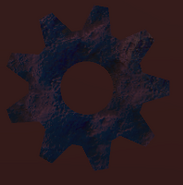 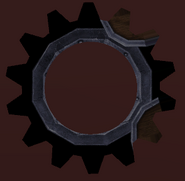 Star Gear
Add a photo to this gallery

Due to the lack of collesion detection from the Star Gear, said gear was optional and mostly useless.

When the player completed a level (whom was possible to do so), the player would receive a screen showing:

On the left side, it shown how many stars the player received (from 0 to 3).

Below was the Score Board along with the Try Again button, Main Menu Button and the Next Button (Level 1 exclusive). If the player hovered the curson on both the Main Menu and Next button, it would show the Cancel Button instead of the blue texture. Clicking on the 1v1 button would lock the player on the choosen level screen.

Retrieved from "https://dreamworks-school-of-dragons.fandom.com/wiki/Mysterious_Gear_Minigame?oldid=19533"
Community content is available under CC-BY-SA unless otherwise noted.