New Berk is a Starter location added in February 21st, 2019, as part of v3.0.0 - Hidden World Update. After the events of the 3rd film installment, New Berk becomes a new home for all the residents from Old Berk including a whole new look for The Great Hall, a new entrance for the Stables and Loki's Maze, a new explorable look for the Blacksmith, the new location for old Berk's Store hut and the second method of access to the Hideout. The location is also introduced in The Stormheart Conundrum from The Hidden World Expansion. 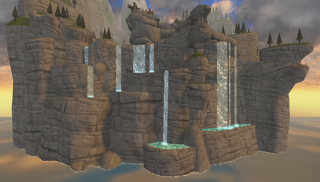 The scarped slopes with waterfalls 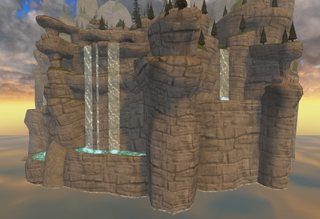 New Berk is a enormous island elevated from the sea levels and it potentially bigger and wider than the old Berk (though very toned down in the game), following its appearance in How To Train Your Dragon: The Hidden World, the New Berk is contains a caldera-like formation inside of the main mountainous border, similiar to the likes of The Lookout, the underground lake forms a group of plunged waterfalls segmented into multiple lakes that fall into the ocean. Because New Berk is toned down in the game, the dense forestation seen in the movie is reduced to groups of trees in the mountains. Though, just like Berk, the Flight Boundary is rather large and players can fly as high as the tallest mountain. 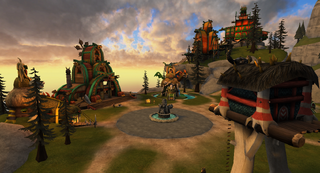 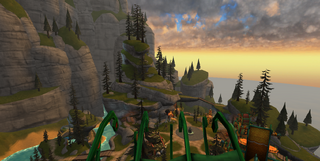 Within the center of New Berk who also behaves as the main spawning point, the toned down version of the village contains the Riders' 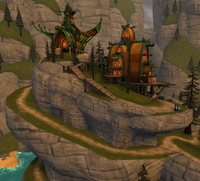 becoming the second location to access it, and the entrance to Loki's Maze, similiar to The Lookout and Berk, the Job Board is located on the center, next to Astrid.

To the left of the spawn spot, there's a large ascended slope that contains both Hiccup and Astrid's house and The Great Hall, between both sits Valka and her Stormcutter, Cloudjumper, and the Store sits right after the first climb. To the right, two paths lead to two different locations, the left path leads to the Fishing Spot with Mulch next to it, and the right path leads to the elevated stacked ridges atop of the plunged waterfalls; continuing to follow the left path will lead to the entrance of Hidden World. 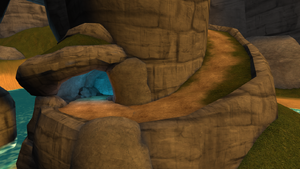 Due to the caldera-like appearance, the bottom section of the inside formation includes multiple archs and 2 tunnel-like caves for the players to fly and/or swim under, in spite of multiple coastal bays, only one coastal bay includes a fishing spot, located near an elongated estuary that leads to a dead end. During The Hidden World Expansion, one of the stacked ridges will contain a border made of stone with some catapult upon completing Home Sweet New Home, on the same quest, the player will also learn about the choppable trees behind Fishlegs' house.

Retrieved from "https://dreamworks-school-of-dragons.fandom.com/wiki/New_Berk?oldid=38382"
Community content is available under CC-BY-SA unless otherwise noted.