Night Light/Dart is still incomplete. Please remove the checklist upon completing all the tasks.

Dart is one of the three Night Lights, she has average Racing and Battle Stats and was the only triplet available in the Store for 2,500

Following the general characterization from How To Train Your Dragon: Homecoming, Dart is often seen as the "mastermind" in the majority of the times they're on screen, either pulling a mischievous behavior such as biting Dagur and Mala's present in Ooh, they're in trouble... or always being placed as the first if the trio are running or flying around together with one or two exceptions. During most of the Snoggletog Dailies, she's either chasing her brothers around or standing still, with one or two Dailies fearuring her sleeping - Dart appears to be rather strong as she's able to pull a raft with a baby Deadly Nadder, Flame Whipper and Gronckle with an ease.

She may be immediately unwary of any Dragon, elders such as Valka's Cloudjumper are capable in bringing order to the trio, including making Dart cower in fright behind her mother. Dart's method of hiding is usually by hiding inside things such as bushes[src] or in a pack of snow[src].

While they can be easily confused due to their overall black body color, the best way to differentiate Dart from Ruffrunner is by the Blue eyes, white nose tip, white nub tips, smaller paw pattern, bigger underbelly pattern that extends to the lower jaw, bigger fin pattern and black back spikes.

Official Render of Dart from the Store 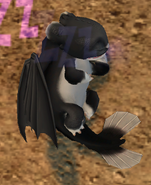 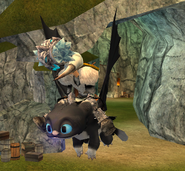 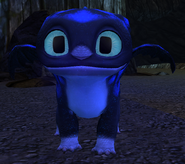 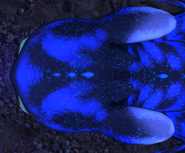 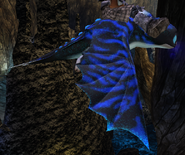 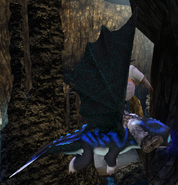 Dart pushing a raft with baby Dragons on it

Ruffrunner and Dart playing while Pouncer sleeps
Ooh, they're in trouble...

Dart hiding in a Berrybush during Respect Your Elders!

Dart hiding in snow during Night Light and Seek

The Trio in Swimming with Eret

Dart looking around in Journey into Peril

The Trio in Journey into Peril

The Trio running in Youth in Revolt 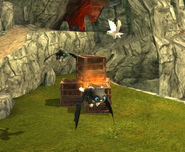 The Trio flying in Youth in Revolt

Ruffrunner and Dart in All About the Gleam Gleam

Fury Family in The Air Show
Retrieved from "https://dreamworks-school-of-dragons.fandom.com/wiki/Night_Light/Dart?oldid=42493"
Community content is available under CC-BY-SA unless otherwise noted.