Nikora Stormheart is one of School of Dragons' original characters and she first appear in Rise of Stormheart expansion. She's often located in her warship, The Tempest or at Auction Island.

Nikora's appearance indicates that she is a middle-aged woman. She has medium, black braided hair decorated with beads, brown eyes, and dark skin color. She boasts a facial war paint: a white line going across the face, two white lines on her cheeks, and a thick blue line on her chin. She also wears a thin headband with a blue stone on her forehead.

Nikora wears a sleeveless blue dress with white accents and an undershirt of the same color, except it has white Stormheart symbols on the cutibal fossa (inside of the bend of the elbow). She also wears a pair of soft, light green and yellow bracers that extend on the back of her hands. Additionally, she wears brown leggings underneath her dress that extend to the knees, as well as a pair of plated greaves with a four-edged blade at each of its outer side. Most notably, she's the only character who wears sandals.

Her weapon of choice is an incurved spear with a blade that has an embedded jewel on both of its sides. In some promotional art, the blade's body consists of two outer teeth whereas, in other promotional art and official in-game model, there are two holes in their place.

Nikora is cruel, as she won't hesitate to crush her enemies, and has no respect for life, as shown in Ultimatum. On several occasions, she demonstrates that she won't keep to her word once obtained what she wants.

Her only motivation seems to be power and she hates any threat of it being taken away. She is willing to ignore her conflict with Berk to fight off bigger threats.

Nikora demonstrates to have deep knowledge of dragons, as she was able to train a Seashocker. In addition, she exploits the properties of Grimora, a dragon parasite, to her advantage. She has several Moldruffles and a Gronckle on her warship to warm the furnace. It is evident that she possesses advanced knowledge in technology, as she can build automatons to help her in her battles.

Nikora is a pirate queen who arrived in the Archipelago seeking new business opportunities.

She owns a powerful warship, which is named The Tempest, and has several men under her command. Judging from the cages on her vessel, it is clear that Nikora's business is related to dragon hunting.

Aside form being the main villain in later Expansions, not so much is told about Nikora Stormheart's origin as the game kept it as a mystery to the player. The only piece of potential backstory released in the game was briefly mentioned in Wrath of Stormheart during Ultimatum, after the player collected Stormheart's Heirloom, but as per usual, its actual story is left unknown.

She can be found on:

Her first appearance is at the end of the quest What's Going On?, where the player follows Harald to th Tempest. In The Queen of the Sea she states that she has no intention to harm Berk or Hiccup, and that she only wants everyone to stay away from her business. She also offer a gift, that later on will be discovered to hide a dangerous surprise.

In Grimora Solutions, we find out that Nikora is able to extract toxins from Grimora parasites, and uses it on dragons to make them wild.

A confrontation is inevitable, as seen in Taking the Offensive.

While Nikora herself doesn't appear until the quest The Trouble With Lumie, we are following her shadow in the early quests. In Dagur in Distress, we free Mala and Dagur from the Tempest, then we rescue Skulder from The Ship Graveyard.

There we discover that she's headed to Vanaheim. In The Guards of Vanaheim, we arrive at the island after Stormheart's attack. The Sentinel that guard the island were injured with pepper gas, that blocks their sense of smell. In Hallowed Ground we discover that Nikora was searching for something inside the pile of dragon bones that rest on the island, leaving behind a mess.

In Stormheart Rising we confront her for the first time in this expansion. In Ultimatum she won't hesitate to send Fishlegs to the bottom of the ocean to obtain what she wants.

In The Scourge of Stormheart we again confront Stormheart's forces all around the archipelago, where she's extending her influence. In The New Auction Island, Harald reveals that her ancestors ruled over some islands in the Archipelago centuries ago. On account of this, the inhabitants of Auction Island recognize her as their leader, in an apparently peaceful change of power.

In this expansion Stormheart has a minor role, as one of the main influence in the archipelago. In The Stormheart Conundrum she proposes a temporary peace with Hiccup, to deal together against the warlords. In Parley she participate in the meeting with Grimmel, where she realized that Grimmel himself is no menace to her, but she seems to not trust him entirely. She will participate in the attack to the Warlords' camp in Throwing the First Punch, but she will retire as soon as the situation turns bad.

Harald appears to have been Nikora’s guide to archipelago, as in Rise of Stormheart she mentions him talking about the player or the dragon riders as the source of her information. He joined her somewhere in between the events of Return to Dragon Island and the aforementioned expansion pack.

Harald respects her greatly and often sings her praises. But he's worried about Nikora's use of the Grimora venom, dreading she could use it on Leopold. [src]

While it is highly likely she is aware of his betrayals, by Wrath of Stormheart Nikora trusts him enough to allow him to lead an attack, though it is just a distraction. She lets him choose the player to be the messenger between her and Berk.

Before meeting Hiccup in person, Nikora heard of him from Harald, and thinks he's "a fascinating man" and she admires Berk's "strength and ingenuity". While she says she doesn't want to be enemy with Berk, her acts say otherwise, as shown with the accident with the crazy Triple Stryke. Hiccup seems to believe her words [src]. He will change his mind after they discover that Stormheart's "gift" had a dragon egg inside, driving the Triple Stryke mother crazy. He says her acts are despicable and he won't forgive her [src].

When Stormheart takes Auction Island, he's worried as everyone else to see this menace growing in the archipelago, but he also believes that as the transition of power was peaceful, and people of Auction Island choose Stormheart as their leader, the riders have no right to intervene. [src]

After the warlords appear as a new menace in the archipelago, a temporary peace is done between Stormheart and Berk, one that Hiccup hope could be definitive [src].

Astrid and Dagur immediatley show to not trust her since the beginning, and they are cautious towards her [src]. Dagur states the Nikora is similar to his old self, when he saw Hiccup as enemy, and rightfully predict that Stormheart will retaliate after the riders accidentally attack one of her ships [src]. Dagur's opinion of Stormheart worsen even more after he and Mala are trapped inside the Tempest, and he'll always be ready to fight her [src].

Fishlegs thinks she doesn't care about dragons and he's worried she will destroy Vanaheim [src], a feeling shared with the Archaeologist [src]. Skulder also thinks she has "no morals", and she "cannot be shown any mercy" [src].

Snotlout recognize that Stormheart is always ahead of them, and they need to stop her, as she could "bring about The End of the World" [src].

Nikora Stormheart on her warship

Nikora on her throne in Auction Island 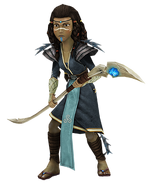 Nikora riding her Seashocker with her warship behind her

The Tempest is Nikora's warship. It's a huge vessel, with 2 main decks, with 2 spiked doors on the front. This leaves a sea portion inside the ship, that lets Stormheart trap smaller ships within her vessel.

Apparently, the huge ship is moved thanks to steam force, and for this purpose on the central back portion of the ship there is a huge furnace with supposedly water inside, heated up by Moldruffles and Gronckles.

General view of The Tempest

A Moldruffle heating the furnace

The Storm attacking Berk in Wrath of Stormheart

View of the warship

Nikora with some of her crew

View of the warship

Retrieved from "https://dreamworks-school-of-dragons.fandom.com/wiki/Nikora_Stormheart?oldid=42149"
Community content is available under CC-BY-SA unless otherwise noted.