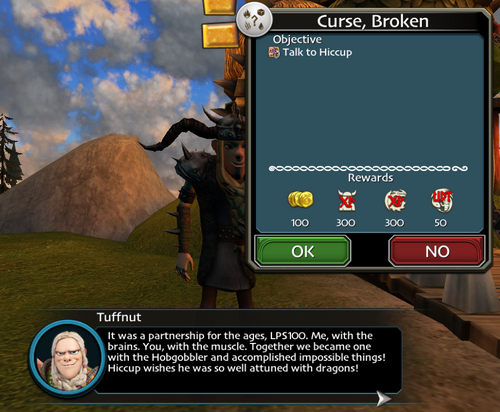 Quests are one of the main mechanisms of the game, they serve as the primary source of Experience Points and Coins though they can also unlock Locations and the reward can go from pieces of exclusive clothing to Dragon Eggs, they also the method the game uses to tell its story and the Expansion Packs' story. They've been in the game since the beginning and as the game updated, more quests would be added, all witrh a variety of tasks ranging from collecting items to playing a Minigame.

How do Quests WorkEdit

In order to gain a quest, the player needs to head to an NPC that contains a big, orange "!" on the top of their head (or just the exclamation mark in case of A Dragon Mystery), when accepting the quest, the player will see a pop up: 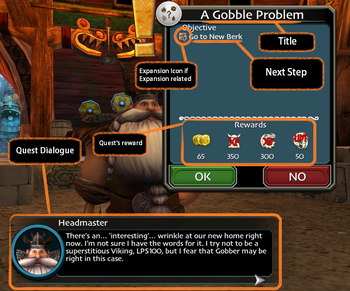 During a quest, an arrow will point the player to the respective destination, if the destination is to talk with another character, the character will have a big, orange "?". It should be noted that the arrow can sometimes be a bit glitched, for example, pointing at the wrong place in spite of the player heading the right way, or will point at one specific collectable in spite of being more collectibles closer by the Player. The steps vary from collecting specific items to playing other Minigames, some quests are divided in 3 sub-type of Quests:

After completion, the player will receive the reward and in case of the Main Quests, more will unlock from in. While the reward's quality varies in amount, the reward will always include:

Some quests will reward more than the Experience Points and Coins, these include Dragons, Clothing, Animals, Farm Decoration and Hideout Decoration.

Retrieved from "https://dreamworks-school-of-dragons.fandom.com/wiki/Quests?oldid=35003"
Community content is available under CC-BY-SA unless otherwise noted.