Return to Dragon Island is the fourth expansion pack released in School of Dragons. It was released on June 24th 2016, as part of version 2.0.

The original price is 1250 Gems

Return to Dragon Island was released ahead of the premier of the third season of Dragons: Race to the Edge, which, according to the game's developers, provided the inspiration for this expansion pack.

A mysterious fog is rolling in and has been leaving the dragon trainers on Berk sick. After rescuing your friends, you are tasked to help figure out what this fog is and from where exactly it might be coming. Along the way you have the chance to work alongside Eret to free trapped dragons and catch up to old adversaries who are up to their same antics. But that’s not the only legendary Viking to make their debut in this expansion pack. After much anticipation and speculation, Valka has finally found her way to campus and wants to help you train 2 dragons that have previously been never-before- seen near the school grounds. Think you have the skills to unlock the Singetail and Eruptodon’s full potential? The time has come for you to rise up with Berk’s elite to test your abilities!

Fly to campus now to put your dragon training skills to the limit as you visit the place where the Dragon Riders once came face-to-face with Red Death and explore the island’s deepest and darkest corners by unlocking the expansion today! Only those who can withstand the heat of the live volcano will be able to uncover the untold mysteries of this much talked about island.

What You Get Edit 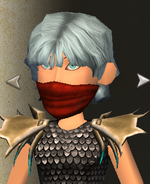 Gas mask - back
Add a photo to this gallery

Retrieved from "https://dreamworks-school-of-dragons.fandom.com/wiki/Return_to_Dragon_Island?oldid=37511"
Community content is available under CC-BY-SA unless otherwise noted.