From the School of Dragons Game Guide (pre-update):

"Ruffnut and Tuffnut are fraternal twins that participate in dragon training with Hiccup. The twins are constantly arguing and fighting, often resolving their petty debates by hitting each other. Despite their incessant bickering, they are always together and work as a team. They are especially cooperative in taunting Hiccup and pointing out his flaws while bragging about their own skills as dragon slayers. Their words prove ironic and humorous as they struggle just as much as Hiccup does in their training.
"When Hiccup learns to train dragons, they are quick to praise him, now fighting to be the first to talk to him whenever the chance arises. Ruffnut even seems to develop a crush on Hiccup as she flirts with him, much to Astrid’s disapproval. The twins become good friends with Hiccup as they help him defeat the Red Death and finally bring peace to Berk."

Ruffnut can be found by her house in Berk, which is adjacent to Fishlegs's, in the Training Grounds, by what was the entrance of Bull's-eye Lagoon, and on Dragon's Edge, by the catapult. 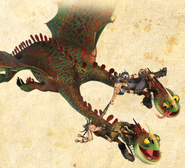 Group illustration in the loading screen
Add a photo to this gallery
Retrieved from "https://dreamworks-school-of-dragons.fandom.com/wiki/Ruffnut_Thorston?oldid=32361"
Community content is available under CC-BY-SA unless otherwise noted.