School of Dragons or more colloquially known as The School is one of the 5 major locations, home of some and steps of multiple Quests, the starting location of all Expansion Pack quests, where Alchemy Adventure and Lab Quests involving Science Experiments take place, of The Hatchery and home of about 4 entrances to 4 important locations. The School is also the default landing location when opening the game.

In the upperground section, a group of buildings representing the School itself is located in the center of the caldera, forming an encurved "[", with multiple entrances to The Great Hall. In front of the School, nearby a column is where The Headmaster is located, ready to give Quests and start the Expansion Packs. Behind the School is where the Lab and the Alchemy Adventure minigame, and The Hatchery are both located at, with a wide path in between, to the left of the Lab there's a small cavern entrance that leads to The Wilderness as well as a small lagoon with a freshwater fishing spot.

In front of the large lagoon and the school, there's a large, thick caldera crack on the wall where players can exit and enter through it, and outside the school, there's a small piece of ice with a saltwater fishing spot. Though the crack is often used as a teleporter for quests like Sentry Point, in moments like those, players can fly outside the caldera or head left to a wide opening in the middle of the top cliffs and go through the cylindrical hole.

The School's docks had once a ship that headed to Berk located in a second sea stack, the sea stack had the most noticeable feature of the School: the Geyser Elevator. The Geyser Elevator was once a way to transport the player and their baby/teen dragon to the uppergrounds without having to take the stairs or having to change to a flying dragon. The School's docks was also were Fishlegs was before being moved to The Lookout.

But in v3.0.0 - Hidden World Update, February 21st, 2019, Harald Forkbeard invaded the School and implemented a bomb on top of the Geyser Elevator, Hiccup and Astrid tried to stop Harald but it was too late, the Geyser stops, bringing the platform with the bomb downwards and it explodes, breaking and shattering the Geyser Elevator and bringing a enormous chunk of the underwater grounds with it, creating a chasm. 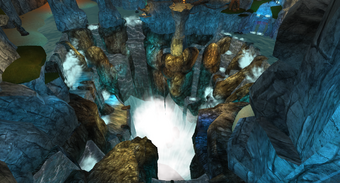 Close-up of the chasm 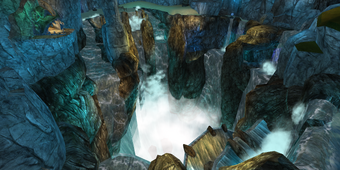 The chasm is a wide, deep, steep-sided hole created by the explosion of the mystery box, it's enormous, almost the side of the School building and as deep as the entire School's underground section. It contains lots of waterfalls due to the lagoon's underwater grounds shattering and taken down the hole, in the very end of the hole, there's a dense cloud of steam fog. In some of the cliffs, there's a tunnel and a cave for players to fly or hamg out in, and while the Geyser Elevator pillar has been completely shattered and taken down, the World Map pillar is still intact, with the edge close to the chasm a bit shattered. This is now permanent and the new look of the School, without any way of going back to original version.

The chasm isn't an ordinary hole, however, players who bought the proper expansion will unveil a whole new world: the Hidden World Annex.

In spite of the giant chasm, the School still contains the 4 main fishing spots.

Once the sole location in the game, School of Dragons has now lost many of its original buildings as new locations were added to the game. Amongst these locations were Fireball Frenzy, the player's Farm, and The Commons, since relocated to the Training Grounds, The Lookout, and removed from the game, respectively. The School is now home only to the Lab, The Hatchery, The Great Hall, and a few Fishing spots. At v1.9.0, the water is now swimmable and won't respawn players elsewhere in the map.

Retrieved from "https://dreamworks-school-of-dragons.fandom.com/wiki/School_of_Dragons_(Location)?oldid=41289"
Community content is available under CC-BY-SA unless otherwise noted.