Scuttleclaw Island is one of the eight islands of Battle for the Edge expansion pack.

It can be accessed only after the purchase of the expansion or with membership.

Covered in snow, this seemingly inhospitable island is instead the nesting site for two dragon species: Scuttleclaws and Flightmare. The presence of vulnerable nests and babies makes it a target for a predatory Skrill.

There are no characters and World Map stand in this location.

Dragons that live on the Island Edit

There are two saltwater fishing spots, near the two entrances of the cave.

Overview of the island

Other view of the island 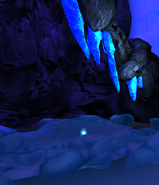 Flightmare nest
Add a photo to this gallery
Retrieved from "https://dreamworks-school-of-dragons.fandom.com/wiki/Scuttleclaw_Island?oldid=25587"
Community content is available under CC-BY-SA unless otherwise noted.