As for V2.3.0, in the intro sequence, the Shockjaw is one of the four Secondary Starter Dragons that can appear caged, most likely to unlock the Stable Missions without needing to buy a new dragon (the player still has to choose their actual starter dragon).

On 7th of August, 2018, the Shockjaw received a Titan Stage.

"Instead of fire, this Tidal Class swimmer emits bio-electricity, from a gentle jolt to a lethal bolt! It can be quite the shock. The bolts it emits can be strong enough to take down an entire ship and its crew!

"The Shockjaw's electrical stream attack makes the power of lightning feel up-close and personal. The Shockjaw shoots powerful blasts of bio-electricity, similar to the Skrill and Seashocker, which shoot electricity. It is very strong and it should work particularly well underwater as water is a conductor of electricity and its blast can be conducted around it. It also has the ability to control how powerful its electric shots are. The Shockjaw is described to be the fastest flying dragon of the Tidal Class."

For more information on the Shockjaw, visit here.

A wild Shockjaw is found trapped in a Dragon Hunter's cage along other dragons at Hobblegrunt Island. It is stated that this is not its natural enviroment. 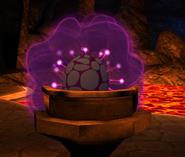 The glowing effect of the Shockjaw egg 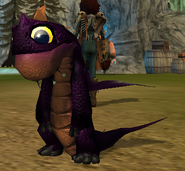 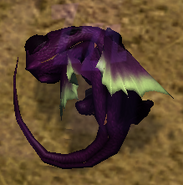 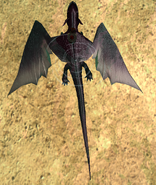 Shockjaw Braking
Add a photo to this gallery 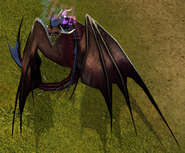 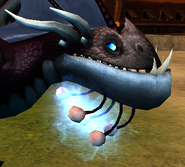 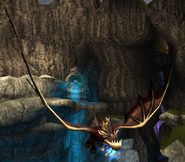 Titan Shockjaw Braking
Add a photo to this gallery

Shockjaw Hero Skin (limbs, Head and the Thoracic and adbomen cavity)
Add a photo to this gallery

Retrieved from "https://dreamworks-school-of-dragons.fandom.com/wiki/Shockjaw?oldid=39434"
Community content is available under CC-BY-SA unless otherwise noted.