Skulder the Archeologist is one of School of Dragons' original characters and the most used in Expansion packs. He's located in Icestorm Island and later in Mudraker Island.

Skulder is a male, young adult archaeologist, possibly around in his 20s judging by his growing beard and mustache duo. Living in the arctic, he wears special thermal clothing appropriately for the weather which includes a long sleeved shirt, long sleeved pants that are covered by tall boots with a fuzzy collar and a short ushanka hat with two black feathers coming out of it. He also wears an armored/fuzzy collar to protect his shoulders.

Being an explorer and archaeologist, he carries a camping bag with a sleeping bag compartment and a horn on the right side, possibly used to carry water. 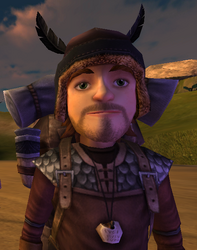 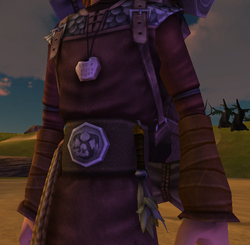 Skulder is a very simple yet welcoming archaeologist, welcoming the player and Hiccup to his camp, despite them building an igloo in his camp. Very welcoming and a little too friendly as he doesn't show any signs of suspicion and he's willing to demonstrate his work to people he never met before.

Being used to the Vikings' old ways of killing dragons, he first shown distrust, doubt and suspicion over the trained dragons, still rather not get too close to them in fear of a possible attack. However, despite his distrust on dragons, he found the idea of training what was once Vikings' fearful enemy fascinating, lampshading how exploring unknown territory would be easier with a dragon by the side.

Overtime, Skulder leaves his old Viking ways and goes further to even train his own dragon: a Mudraker named Muddy that he met in Mudraker Island.

Skulder has shown to get excited and eager to see and explore anything to do with archaeology and even going as far to show and talk about it to the player.

Skulder used to live in Berk during the times of war with the dragons and, at the time, young Vikings had to learn how to fight against the dragons so that in the future, they could keep up with the war and defeat them. However, Skulder didn't find it interesting at all, he didn't find an interest and liking in wrestling and fighting dragons for a living but he did find an interest in exploring the shores (possibly to discover and to study the shells through simple hand excavation in the shores).

His fear for dragons originated in his childhood, from the fear he felt during the numerous dragon's attacks [src].

Eventually, possibly around at an older age, Skulder left Berk and followed what his skills were meant for: Archaeology and exploration. While he's happy with where he's at, he does shows signs of missing Berk.

Skulder is often used to teach Archaeology however, in terms of story-telling, he's the "damsel in distress" of the game as in almost every Expansion, he gets caught, often locked in a cage. One of the questions in Dragon Tactics to earn extra gear even mentions that he has a habit of being trapped in cages.

In Fishing for the Ages his first name, Skulder, is introduced for the first time. As this quest was introduced after Battle for the Edge, in this and previous expansions he's mentioned as simply "the Archaeologist".

He appears in some Event quests: he's one of the first to catch sight of the Dreadstrider in Dangers in the Ice, and apparently has work to do in Snotlout's Sentry Station as seen in Words, Scattered and Lost.

The player meets Skulder for the first time in Fellow Explorers. He has a camp on Icestorm Island, where he is looking for ancient Viking artifacts. Being knowledgeable in archaeology, he will support the player in their exploration to retrieve ancient artifacts (The Mystery Box, X Marks the Spot, Clue Snatcher, Tea Time, Kindred Spirits, Pots and Plants) and to know more about the island ancient civilization (The Dormant City, Digging into the Past.

But he's also knowledgeable in natural history, as he will explain about the Arctic climate (Catching Daylight) and geothermal oasis (The Mystery Box).

He visit the School and berk while remembering the past in Catching Daylight.

Call of the Death Song Edit

The Archaeologist is a side character in this expansion, and appears in only a few quests: The Mysterious Dragon Eye, Journey to Death Song Island, The Groncicle Inside Scoop and The Aftermath.

He had a digging camp on Melody Island, but he apparently left it in a rush as all his tools are still there. He manages to get trapped in Death Song amber, and the players need to free him [src].

Again, the Archaeologist is a secondary character in the expansion. He has a digging camp at Mudraker Island, where he is looking for no better specified viking artifacts.

The Archaeologist is trying to overcome his fear of dragons, and train his own dragon, with the help of the player. However, it won't be as easy as he thought. He is impressed by the size of a Mudraker, when this dragons stands next to him for the first time [src].

He doesn't understand dragon psychology, and he anthropomorphizes the Mudraker's behavior, thinking it "hates him". However he later understands that the dragon doesn't know that its actions causes problems to the archaeologist, and acts following its instincts. He however still isn't ready to fully bond with the dragon, and prefer to remain friends with him [src]. He is patient towards the Mudraker's overly playful nature [src].

When Harald Forkbeard steals everything from Dragon's Edge, Skulder is briefly accused of being his partner in crime, but is soon revealed that is not true, and Harald encaged him on Mudraker Island [src]. After that, he reveals the true nature of Harald, and here ends his contribution to the expansion. [src]

Skulder appears for the first time in the quest Dragon Rider, Undercover. He has been exposed to the toxic fog for a long time (while digging on a site), and he fell ill. He is then cured at the Clubhouse. [src]

He then join Eret and the player to Auction Island, to investigate some "magic bones" that Harald is selling. They discover that it's a Red Death tooth, that supposedly has the power to turn dragons to stone. But Skulder recognize they are instead fossils, and he's bothered by the fact that interesting items like those are distorted. [src]

He then goes back alone to Auction Island to "fix the problem", but he is attacked, loses consciousness, and when he wakes up he's accused to have stolen the fossils. He's then trapped in a cage. [src] When the player proves he's innocent, he's freed and both go back to Dragon Island [src] .

Skulder has studied geology and dig in sites near volcanoes [src], so his knowledge is helpful to understand the phenomena that cause the toxic fog [src] . While he indeed is helpful in understanding what causes the fog, and how to solve it, [src] he's also the one that wakes the Green Death. [src]

Secret of the Leviathan Edit

Skulder happens to be on Impossible Island when you are searching for the Krayfin. He and Phlegma follow you to the entrance of the Defender’s Maze and he is the one to notice that it belongs to the defenders src

He, Phlegma and Mala accompany you through the puzzles. He explains a few, including the room where you are required to lower the water level. He then panics due to calling Phlegma ‘dear’ and asks you to hurry up. After you meet a mysterious baby dragon and get attacked, he is even more frightened than before.src When running into more of these dragons, he is absolutely petrified. src

At the front of the ruins, he states that the Krayfin seems desperate to get inside. While you figure out how to get in, the Archaeologist leans on a wall that turns around. From the other side of the wall, he claims the only thing that was bruised was his pride and tells you where to go with Phlegma. src

After opening the door to the ruins, you find him in, to no one’s surprise, a cage. You free him and he instructs you to light the fire in the Eruptodon statue’s mouth. He lets you go with the Krayfin while he keeps the fire lit to scare away the wild dragons. src

You speak to him again in Congratulations! to thank him, as you do towards the end of most expansion packs to the characters who have helped.

Skulder's mandatory appearance in every expansion translate here in a negligible role for him. In Johann's Secret Mission he offers to go to Auction Island to give Stormheart back a crate of goods that was stolen by the riders from one of her ships. He apparently stays there until Is Harald Our Last Hope? where he joins the player for an underwater exploration.

Poor Skulder has it rough in this expansion. First he kidnapped not once, but twice by Stormheart, that leaves him on the Ship Graveyard the first time (Dagur in Distress) and brought him to the Tempest the second time (Ultimatum). Then he also has to face Stormheart's pirates on Mudraker Island, and he's rescued by the player on each occasion (The Scourge of Stormheart).

But he get to show his paleontology skills too, in the quests that took place in Vanaheim (Hallowed Ground, Stormheart Rising). As Stormheart's personal translator, he's somewhat of help to figure out Stormheart's plan, but too late, as she gets all she wants in the end.

The first expansion that is Skulder-free.

Curse of the Hobgobbler Edit

Skulder is at New Berk when the Hobgobbler invasion starts, and will join the player in all the quests to unravel the mystery. He takes the spotlight away from Gobber, who in the movie is the character actually linked to the Hobgobblers' comedy skit.

From a cage on Mudraker Island in The Legacy of Harald

From a cage on Auction Island in The Search for Harald 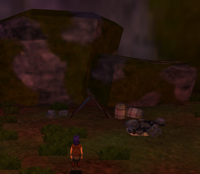 After many adventures together (and rescues), Skulder has a high opinion of the player's viking, describing them as the "braver [and] smarter dragon rider". [src]

Skulder and Harald have crossed paths many times, and, in Skulder's words, Harald has "never failed to prove himself a crafty manipulator and skilled thief. We need to figure out how to protect ourselves from him".[src]

Harald encages Skulder on Mudraker Island, leaving him to his fate, [src] so obviously Skulder has a grudge against him. [src] When he finally meet Harald again, he is pretty angry, and threatens with attacking him physically. [src]

When Harald mentions it’s a shame he couldn’t say hi to Skulder, who’d arrived on Auction Island, and asks the player to do it for him, Skulder is angry and says he isn’t comfortable sharing what he thinks of the pirate. [src]

Skulder mentions that she was just a young girl when he left Berk [src].

In Secret of the Leviathan, they work together a lot. Skulder is honoured to be offered her dragon to ride. Also, he is embarrassed when he accidentally refers to her as ‘dear’ and overreacts greatly. He says Phlegma is always right.src

After seeing the destruction that Nikora brought to the sacred place of Vanaheim [src], Skulder is indignant and thinks she has "no morals", and she "cannot be shown any mercy" [src].

Johann and Skulder consider themselves as friends, and they are also trade partners: Johann gives him treasure maps and in return Skulder gives him artifacts [src].

Retrieved from "https://dreamworks-school-of-dragons.fandom.com/wiki/Skulder_the_Archaeologist?oldid=42176"
Community content is available under CC-BY-SA unless otherwise noted.