The Smothering Smokebreath is a Mystery Class dragon released on August 29th, 2014. They can be purchased for 750 gems (600 for members) from the store.

On April 13th, 2020, the Smothering Smokebreath received a price adjustment and was reduced to 500 Gems (400 for members).

"This dragon can create a veil of smoke to hide from enemies or victims. Because of this ability, it was thought to be a kind of "Fog Monster" and became legendary, to the point that, although the Book of Dragons had information about it, Fishlegs believed it was just a myth. It is classified as a Mystery Class dragon. Although they usually breathe smoke, they can breathe a very hot fire, since it is capable of melting metal in a matter of moments. A large swarm may appear as a strange smoke cloud. The Book of Dragons in Wild Skies says the smoke is pumped out of their skin.

"Smokebreath packs have the habit of collecting treasures and 'shiny things' to merge them together to create their nests, in order to defend themselves from other dragons. They often go to extremes to collect treasure, as shown when they all formed a cloud of smoke and chased the riders for their metal.

"Another of their characteristics described in the Book of Dragons is that they are very territorial. A group of them live in caves on an island called "Breakneck Bog" (which is the thumb of five islands that look like a hand).

These creatures hunt in complete stealth. Hidden by the smoke, they surround their prey and close until it cannot see anything, so they attack.

"One of this dragon's greatest abilities is its legendary reputation. At the first sign of its smoke, many vikings will clear out of a village, leaving all the metal free for the Smokebreaths to plunder."

For more information on the Smokebreath, visit here. 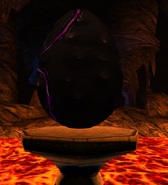 Smothering Smokebreath Quest
Add a photo to this gallery

Retrieved from "https://dreamworks-school-of-dragons.fandom.com/wiki/Smothering_Smokebreath?oldid=39392"
Community content is available under CC-BY-SA unless otherwise noted.