Snotlout's Sentry Station is a non-member location that, before v2.12, could only be unlocked after Sentry Point.

It's a pack of multiple sea stacks with a larger, main isle on the right side and, it's one of the few locations that is exclusively nighttime.

As for v2.12, May 30th, 2018, Snotlout's Sentry Station has been added to the map, fixing the glitch and allowing an easier way to access it.

The entire station has large sea stacks and a small, rocky isle surrounded by sea, however, the small rock in the middle of the sea isn't solid. 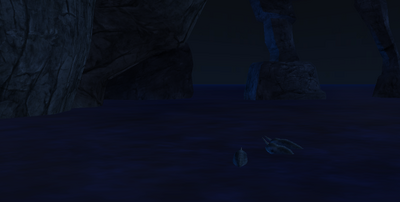 In front of the main isle, there's some narwhals in the ocean.

Since it's meant for people to enjoy the view and to fly around, it's very open ended and, it's filled with sea stacks for the player to avoid. It doesn't have any Fishing Spots and the Flight Suit can't be used here.

The isle is the main spawning point and, it's where the Telescope and the Thor Statue will appear after completing The Almighty Thor. If the player looks to the left, there's The School in the distance.

Retrieved from "https://dreamworks-school-of-dragons.fandom.com/wiki/Snotlout%27s_Sentry_Station?oldid=27528"
Community content is available under CC-BY-SA unless otherwise noted.