The Speed Stinger is a Sharp Class dragon introduced on April 24th, 2015. They can be purchased for 750 gems (600 for members) from the store.

"The Speed Stinger is described as the Velociraptor of the Dragon World, being extremely intelligent and cunning. These dragons are ravenous scavengers, that will often steal from other dragons and Vikings but they probably also hunt. They live in packs, led by a Lead Stinger, and have a hive-like mindset. They hide under the shadows of the sun. The Lead Stinger decides everything, and the pack follows wherever he goes; without him or her, the pack becomes useless. Speed Stingers are nocturnal, spending the days in caverns in order to avoid predators. When attacking, they leap in the air and use their stinger to paralyze their victims. Any member of a Speed Stinger pack would be very loyal to their pack, and protect them at all costs, even from its own kind, or previous pack.

"The Speed Stinger lives up to its name. It is the fastest dragon on land, hunts in packs, and can't fly like all the other dragons. However, with its super speed, it can jump higher than any other dragon. It is also shown to be good at stealth and is a highly intelligent dragon. Speed Stingers are nocturnal dragons, but can still be awaken during the day, usually because of an injury. Speed Stingers lack any flame usage. This is because all the internal flame energy goes to its powerful legs, which give it its speed, agility, and the capacity to jump high. Because of their thick hides and large amount of internal energy, Speed Stingers have great stamina for use in an entire night."

For more information on the Speed Stinger, visit here.

Quest: The Hunter in the Blizzard

While not seen in this quest, the player will found footprints of these dragons on Glacier Island. Heather will describe the dragons as really aggressive and migratory species. While it's not clear why they migrate, Heathers speculates it's for searching new prey. In the new territories where they arrive, they will behave like an invasive species, disrupting the original ecosystem by hunting on animals that live there, unbalancing the original food chain.

In the quest, they seem to have attacked a Snow Wraith, probably as a result of the competition for preys, as the Snow Wraith itself is a temible predator at the top of the food chain. This demonstrates that a pack of Speed Stingers can overcome a predator larger than them.

It is also confirmed that this species lives well in extremely cold climates, as both Icestorm Island and Glacier Island are covered in snow all time of the year.

Quest: Returning to the Nest

Titan Speed Stingers are the main problem of the Maze Section from the Hobgobbler Nest, the player has to escort a total of four Baby Hobgobblers into the maze without letting the Speed Stingers catch them. Some will be sleeping and others will always be on the move, walking on a specific pattern. It's unknown if these Speed Stingers natively live here or if they're invasive species. 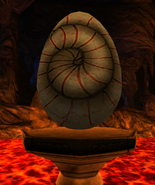 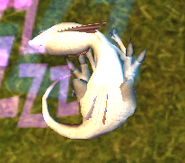 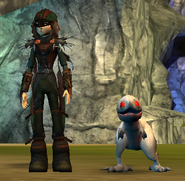 Size comparison between a Baby Speed Stinger and a Viking 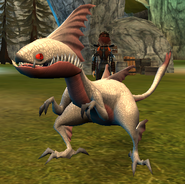 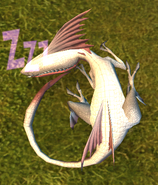 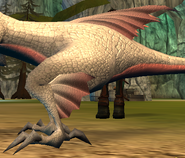 Close-up of the stinger

Size comparison between an Adult Speed Stinger and a Viking 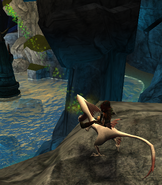 Speed Stinger Jumping
Add a photo to this gallery 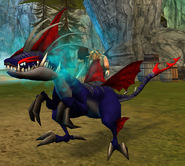 Close-up of the stinger 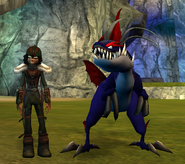 Size comparison between a Titan Speed Stinger and a Viking

Titan Speed Stinger Jumping
Add a photo to this gallery 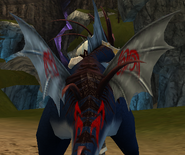 Inner sacrum fins pattern
Add a photo to this gallery
Retrieved from "https://dreamworks-school-of-dragons.fandom.com/wiki/Speed_Stinger?oldid=32882"
Community content is available under CC-BY-SA unless otherwise noted.