We are running a special quiz to determine the Top 5/10 best Dragons and Furies for Racing, Battle, and Combat for the Stat Comparison page!

Stable Missions was released in December 18th, 2015[1] - initially very heavily bugged and unbalanced, missions would very often get stuck after being finished, showing that they where completed but failing to do anything when clicked on. Additionally, the release of stable missions broke the Farm's Job Board and Old Wrinkly's Cauldron for a lot of players. Once Stable Missions became stable, they were considered as "The Golden Age" due to previously being home to multiple Missions that rewarded Gems - nowadays, only three reward Gems after being temporarily removed between May 12th, 2020, v3.8.0, to August 20th, 2020, v3.11.0 due to the Gems being "out of balance"[2]. 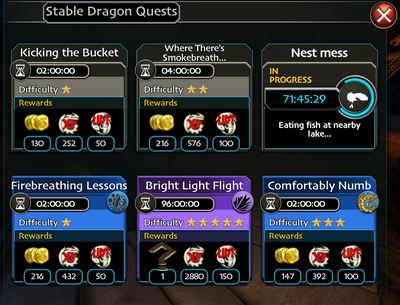 The Stable Missions post is located in the center of every stable, clicking on it will open its HUD, a total of 6 Slots with a randomized Mission appears, the bottom middle and right Slot require Toothless and Membership respectively. Each slot shows: 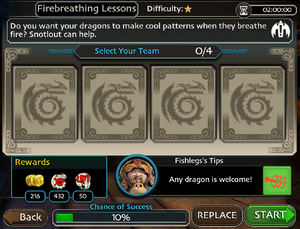 Clicking the slot shows the Selection HUD, which lists more details on the requirements to complete the Mission. Aside from the initial information, it also shows: 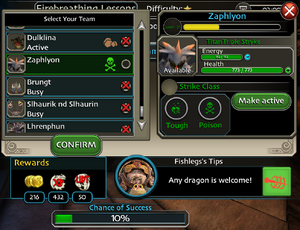 Clicking on the Team Card shows a list of Dragon - for a Dragon to be eligible for a Mission, they must not be active and depending on the Mission, the level needs to reach a certain amount. For example, some Titan Rune missions requires a 20+ Level Dragon, any dragon below 20 won't be eligible. If a Dragon is busy on another Stable Mission, they'll also be ineligible. Selecting a dragon will show:

To add/remove a Dragon to the Team, the player has to click on the check bullet, the number of Dragons the player can select are determined by the number of members your Team can have. Stable Missions will take 10 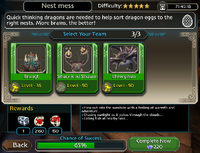 When you send dragons on the mission, the stable slot of each dragon will have a large sign saying "Gone Adventuring!", and on the list, they have a "Stop" sign on their icons - clicking on a busy Dragon will bring a pop-up stating the dragon is on a Stable Mission. When viewing the Stable Missions' HUD, the slot, with exception of its name, will be replaced with a "IN PROGRESS", a silhouette of Toothless hovering and the time remaining for it to finish. At the bottom of the slot, small logs will appear. Clicking on the in progress mission will reveal the rest of the logs and the time remaining for it to end. 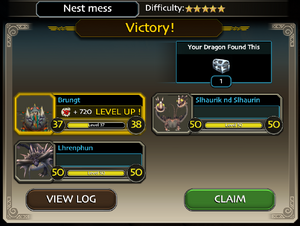 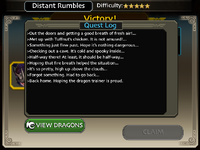 Before v2.3.0, October 20th, 2016, players required to have 2 Dragons but The New Student only gave one Dragon, meaning players had to hatch another Dragon, or if they were Members, place Toothless in the Stable Slot. Nowadays, New Student gives two dragons to unlock the Stable Missions as well as a Tutorial Quest explaining how they work. 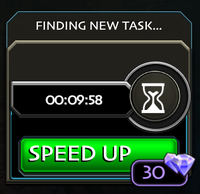 There is no penalty for discarding a mission that you do not want to or cannot complete. As with Farming jobs, discarded missions have a ten-minute cool-down before a new quest will appear in a given slot. Players can choose to spend gems to by-pass this cool-down period and, unlike other such timers in School of Dragons, stable missions become cheaper to purchase the lower their timer gets.

Currently, each dragon has 2 skills,a primary and a secondary skill. The complete list can be seen below.

Community content is available under CC-BY-SA unless otherwise noted.
Advertisement