Stables were introduced on June 6th, 2014. v7.1 and are a required mechanism in order to progress in the game. It allows players to train more than two dragons and it is where the Stable Missions are located at.

The player starts off with two slots, enough for the Primary starter and Secondary starter dragon. Players might need a second stable if they bought a Viking and starter it with Trial Membership due to Toothless and the Light Fury. However, as they progress throughout the game, players will be able to buy more Stables to house more dragons.

Stables contain Slots which are the only way to allow the player to keep a dragon active if the former receives one or hatches one. Although the player cannot interact with the dragon if has not been assigned in a slot, it will not disappear - the game will always remind the player whenever they enter the Stable.

A Nest Slot is where you assign your dragon to a slot, it has a more nest-like appearance, the floor is covered with hay and/or includes a decoration based on where they are. For instance, the Stoker Stable's Nest Slot has metal plates above magma instead of hay. An Active Slot is where your active dragon from x stable will be when entering y stable - this means that if your active dragon is from the Starter Stable and you visit a different stable, the active dragon will appear on the Active Slot, allowing the player to interact with it without having to head towards the Starter Stable. The slot is very open, without any hay or decoration whatsoever, and it is often located either an opening in the cave or a pedestal. 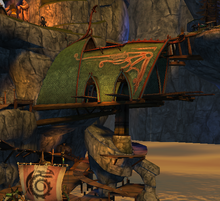 Despite the fact that four of those themes correspond to the different classes of dragons, any dragon can be put into any type of stable. The differences between stables are almost purely visual and auditory, with each stable having its own appearances and soundtrack. The only exceptions to this rule are:

The Cavernous Stables are an item bundle pack containing a Boulder Stable, a Stoker Stable, and a Tidal Stable. Since this bundle costs 900

and its included stables costs 300

each, the Cavernous Stables item bundle is simply a way to purchase one of each of the original core stables with fewer clicks.

This common glitch causes all of a Viking's dragons to be removed from their nest. Prone to causing panic and false reports of being hacked, this glitch can be fixed by reassigning your dragon(s) to a nest. When placing dragons in nests, they do not have to be placed back in the nest they were in before the glitch occurred.

A glitch specific to the Groncicle received for completing a certain quest in the Icestorm Island expansion pack, this Groncicle may duplicate itself, with each duplicate assigning itself to a nest if a Viking has any stables with unused nests. To get rid of the duplicates, use the 'Move In' option to assign a different dragon to the nest being occupied by a glitched Groncicle. Glitch-spawned Groncicles removed this way are removed completely but the original Icestorm Island Groncicle and any other non-glitch Groncicles a player may own will not be deleted if they are accidentally removed from their nest in this way. If you remove a non-glitch Groncicle, simply use the 'Move In' option again to place them in any nest.

A relatively recent glitch, many users find that completing Stable Missions causes all the buttons and info displays on the screen to disappear as well as the loss of the ability to move their Viking. The only currently known solution is to refresh the game. If you are still able to move, then going to the entrance of the stable will fix it.

Retrieved from "https://dreamworks-school-of-dragons.fandom.com/wiki/Stables?oldid=33579"
Community content is available under CC-BY-SA unless otherwise noted.