How to Train Your Dragon

Stoick the Vast was the Chief of Berk and father to Hiccup. Despite holding such important positions, Stoick was not a major part of gameplay, where he aided players in a few quests as well as giving some quests of his own.

Stoick's model in game was based on his looks in the first HTTYD movie.

Stoick was a tall (nearly 7 feet, as a Dragon Tactics quiz tells us) and strong viking with an imposing figure.

He had copper head and facial hair. His hair was shoulder length, and tied in a ponytail, while the beard was long and thick, braided in several short braids just at the tips. His eyebrows were also thick, and often bended in a frown, over small dark green eyes. He had a big round nose.

He wore a long green sleeveless tunic over pants and simple brown boots, closed at the waist by a big brown leather belt, with metallic studs and a big round metallic buckle decorated by an engraved dragon head. He also wore a hip wrap made by a chained metallic rhombus, leather bracers with metallic studs, a helm with long buffalo-like horns attached to the sides, and a fur coat with 2 engraved metallic discs on the shoulders.

His personality in games was based on the franchise Stoick after the first HTTYD movie. He was trying to understand Hiccup's view, but sometimes old traditions were hard to overcome. In the old version of A Gift for Hiccup, he wanted to give his son the ceremonial chieftain's battle axe, something that doesn't really go with Hiccup's personality. He then remedy that by gifting him with ink in For My Son, Hiccup.

Stoick the Vast was the chief of the Viking village on the Isle of Berk. Given his numerous abilities, Stoick was well-regarded as a dragon slayer, as he had successfully led his clan into battle against the dragons that raided his village for years. His ultimate goal was to one day find the famed Dragon's Nest to finish off the population that had been plaguing his people. When it was revealed that Hiccup was more adept at training dragons than killing them, Stoick was incredibly disappointed in his only son. However, with some difficulty, Hiccup was able to convince his father that dragons were not vicious beasts and could be tamed and trained. It took a while, but after the fight with the Red Death and witnessing Toothless’ and Hiccup’s devotion to each other, Stoick was finally able to understand.

Five years after the truce between the Vikings of Berk and dragons, Stoick was reunited with his long-lost wife, Valka, whom he once believed to be dead. The two rekindled their romance, but his family’s reunion was cut short when Drago’s alpha Bewilderbeast gained control of Toothless and the other dragons. Under his command, Toothless almost killed Hiccup with a plasma blast, but Stoick pushed his son out of the way, sacrificing his life.

At one point in the Riders of Berk TV series, Stoick gains his own dragon, a Thunderdrum named Thornado. As the Dragons series continues, Stoick releases Thornado so that his dragon can protect other Thunderdrums. Even later in the series, Stoick bonds to a new dragon, a Rumblehorn who he calls Skullcrusher.

He could be found in front of the Great Hall on Berk.

In the game Edit

With the introduction of Valka, his quests have been distributed to other characters.

Of his dragons, Skullcrusher has been added in the game both physically (in The Hidden World expansion, but with its new rider Eret) and it's mentioned in one stable mission. Thornado only appears in A Sickly Dragon. 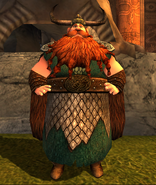 Stoick in front of the Great Hall

Stoick as he appeared in the loading screen's tips

Stoick's model
Add a photo to this gallery
Retrieved from "https://dreamworks-school-of-dragons.fandom.com/wiki/Stoick_the_Vast?oldid=42175"
Community content is available under CC-BY-SA unless otherwise noted.