The Store is a crucial, if not, essential mechanism implemented since the very beginning of the game, as it allows players to not only buy essentials that are crucial to the game but to also buy appeals that increase every so sightly a dragon's stat or the player's running speed, and Dragon eggs to increase the dragon list, thus allowing some Stable Missions to have a higher chance with the proper dragon or even a stronger dragon for Battle.

The Store is notorious for having only about 22,89% of the Store being Coin-priced items, decreasing to a mere 21,56% if counting the Holiday items, whereas about 77,10% of the Store is Gem-priced items, increasing to a 78,43% if counting the Holiday items as well. The number of Gem-priced items have been gradually increasing which have sparked a long, everlasting controversy about how it is impossible to buy anything from the Store when approximately 78,4% is Gem-priced, a currency notorious for being scarce.

) or the green shop cart button in the Customize section of your Journal. It can be accessd at any time except when you're gliding with the Flight Suit, if so, it will be greyed out, nor can you access it during Tutorial quest.

Similar to the Blacksmith, you can find the store in the overworld without any sort of shortcut. They're represented as a small, wooden hut with a roof made of hay and cloth, and a sign saying "Johann's Trading Post". The only locations it appears are Berk and the School, the School's hut being located on a side platform, neary the Training Grounds entrance, and Berk's hut being close by the Blacksmith, players just have to take the birdge to the lower elvel and the hut will be there.

The Store icon in your Viking's UI

The Store icon in Customize Screen

The Store icon in the pedastal inside the Stables 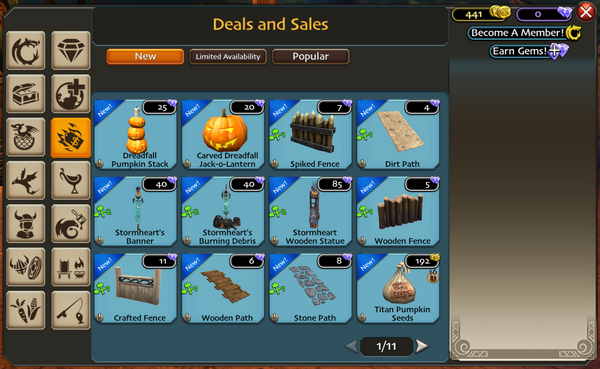 After v2.10.0, the Store received a massive update and organization, adding a color pallete consisting of dark greyish browns and lagoon blues, as well as removing the old Viknig aesthetic which ended becoming a big citique from many players. Everytime you enter the Store, the landing page is Deals and Sales.

With the v2.13.0 update which added Combat stas for the dragons, selecting a dragon will now show you:

When selecting an appeal or a Dragon, you will notice two little icons on the both top corners of the general preview:

The Combat and Racing Stats*

Stats comaprison between a Green Shirt and a Steel Chest Guard

*- Mind you that the Attackpower (ATK), Firepower (FPR), Healpower (HPR) and Health do change throughout the level, the said Combat stats shown in the window are always Level 1.

Each item has its own short, summarized information behind it by clicking the little exclamation mark (

), and while most of the times it doesn't give any real explanation about the item, it gives a brief info about Mystery Boxes and Farm's Fauna and their respective buildings.

Some items and sub-categories share with other categories, meaning that you can either buy the item from that category or from another one. A great example is the Dragon Age Up sub-category that appears in both Bundles and Dragon Care category. Do keep in mind that there's items that once bought, they won't appear again.

The Store is one of the few mechanisms that had multiple updates and changes, however they mostly applied to the organization of the Store itself. The biggest organization changes were between 2016 and 2017 but it wasn't till 21st of December the Store got a full update and change.

The hut was once called "Store" with a woodplank saying "Now Open", it was also more thin and taller than the one in current versions. The UI itself also got a more organized update. 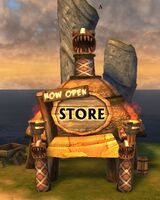