The Sweet Death is a Mystery Class dragon released on February 27th, 2015. They can be purchased for 750 gems (600 for members) from the store.

"This deceptive Mystery Class ambusher buries itself and uses its super sweet-scented tongue to lure its prey. If you have a sweet tooth, beware! When the Sweet Death picks a sweet spot in a battle, it usually stays put until its acid attacks win the day.

"Its tree-like tongue may be a camouflage. Unsuspecting victims may go closer to it to its tongue and it gives the Sweet Death an opportunity to strike. It appears has pink saplings, according to Hiccup. Similar to the Changewing, the Sweet Death shoots highly corrosive acid at its opponents. It is great for achieving offensive and defensive goals, which makes it a dangerous dragon."

For more information on the Sweet Death, visit here.

Sweet Death egg as seen in the store 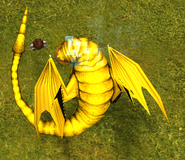 Sweet Death Braking
Add a photo to this gallery 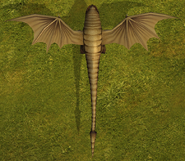 Wing and body patterns
Add a photo to this gallery
Retrieved from "https://dreamworks-school-of-dragons.fandom.com/wiki/Sweet_Death?oldid=36477"
Community content is available under CC-BY-SA unless otherwise noted.