The Alchemist AKA Heather is one of the professors (and main Secondary Character) in School of Dragons.

According to SoD's profile, Heather is an expert and enthusiast in science, and she offers her knowledge of the scientific method to help students to learn what foods dragons prefer, where they like to sleep, and how to keep the livestock away from their new dragon neighbors.

Heather is the daughter of Oswald the Agreeable and sister to Dagur the Deranged. She was given a horn by Hooligan chieftain Stoick the Vast. However, she was separated from her family and was taken in by a couple who raised her as their own daughter.

In the game lore, she decided to go back to Berk once she knew about the opening of the School of Dragons, to work alongside Hiccup and his friends, and offer her scientific expertise [src].

Heather can be found:

In the game, she's responsible for teaching the students/players about all things in science; including the scientific method, how to perform an experiment, geology, and life science. As one of the professors, she gives the player quests. She can be seen located in front of the Alchemy Lab or inside The Great Hall.

Inspired by Heather's actions in Race to the Edge: Season 1, Heather appears as a mysterious Rogue Dragon Rider in the expansion Call of the Deathsong. She appears for the first time with this alias in the quest The Mystery of Sven's Farm, helping the player in dangerous situations. Only later in the expansion's quest flow, her identitity will be revealed.

In this expansion we can see how Heather is conflicted between her duties as the school's alchemist, and her desire to help the Dragon Riders at Dragon's Edge against the Dragon Hunters. This can be seen in the quest The Hunter in the Blizzard.

As she was previously an ally of the Dragon Hunters (as seen in the series Race to the Edge, season 2), she thinks she can help defeat them, as she noted down their defenses and ways in a book. [src] 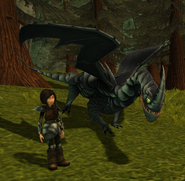 Heather as the ROgue Dragon Rider in Call of the Deathsong

Heather in the Great Hall
Add a photo to this gallery

The Alchemist used to be Katrin the Curious, until 20th of September, 2013 as a part of the v5.4, it changed into Heather.

"Were it not for the circumstances, the tale of Katrin the Curious could have become a tale of any other runt on the outskirts of society. She grew up in a time when Vikings valued strength and obedience over everything else. Smarts and independent thought were useless to the village, and Katrin had plenty of both. She was never interested in battle or becoming another axe swinging Viking warrior. If you asked her, she would rather spend her time studying insects than fighting. More importantly, she has never been one to think ‘enemy’ at the sight of dragons. Instead, a thousand questions would race through her mind. How does the Gronckle fly with tiny wings? How do dragons breathe fire? Do dragons feel the heat of their own flame? How? Why?

Katrin won’t rest until she finds the answer to these questions, and many more. She is eager to throw herself into every problem placed before her, no matter how difficult it may be. Whenever she finds something she cannot explain, she takes out her tools and conducts experiments. In her lab, she often locks in on the problem and tunes out the rest of the world to solve the case.

Her opportunity to shine came shortly after the defeat of the Red Death. The Vikings of Berk were eager to mend their relationship with the dragons. After all, they needed to make a lot of changes to the village if they were going to keep dragons there. Katrin helped with the efforts while Hiccup recovered from the battle. Using the scientific method, she learned what foods the dragons preferred, where they liked to sleep, and how to keep the livestock away from their new dragon neighbors. Because of these efforts, she was the obvious choice for the position of Alchemist when the School of Dragons started.

Katrin doesn’t feel like the traditional teacher to her students. Perhaps it is her age; she is the youngest teacher at the School. Perhaps it is her overwhelming enthusiasm; she can talk a mile a minute when the conversation swings to her favorite topics. Perhaps it is her eagerness to play with dangerous things like fire. Several times during the day, people near the lab can hear loud explosions followed shortly afterwards by Katrin’s delighted laugh. Whatever the reason, students love to attend her science class because they know they’re always in for an exciting time!"

Katrin the Curious before an unknown update

Katrin's original illustration from SoD's website
Add a photo to this gallery
Retrieved from "https://dreamworks-school-of-dragons.fandom.com/wiki/The_Alchemist?oldid=42181"
Community content is available under CC-BY-SA unless otherwise noted.